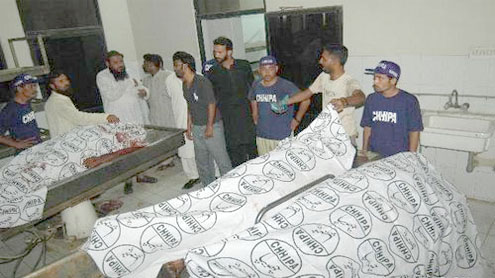 PESHAWAR: Tense calm prevailed in Adezai area as two anti-Taliban volunteers, killed in Wednesday’s suicide blast, were laid to rest at a local graveyard on Thursday amid tight security.About 43 people were killed and 52 injured when a suicide bomber blew himself up in Adezai at the funeral of the wife of a leader of the anti-Taliban tribal militia.Members of the peace body in the area, police and Frontier Constabulary cordoned off the graveyard and only local people were allowed to participate in the last rituals of the deceased Mir Baz Khan and Gul Khan.Local people said that the two had died on Wednesday but burial was delayed for their relatives coming from other cities.

Meanwhile, the lashkar put off its decision on whether to continue supporting law enforcement agencies or not that it had promised to make on Thursday by three days as many of its important commanders were mourning deaths of their close relatives.“We are in extreme shock and unable to hold meeting at least till qul of our colleagues,” Dilawar Khan, chief of the lashkar, told media. He added that he might announce final decision at a press conference soon.To a query, he said that none of the government representatives contacted the peace body so far. “We read their statements about cooperation with us in newspapers only,” he said.Mr Khan said that the Wednesday’s suicide blast shocked the people of many villages, as they buried 34 bodies in Adezai, four in Shaikhan, two in Yousuf Khel and one each in Surizai, Maryamzai and Sharekera.Meanwhile, the lashkar blamed militants for the blast.

A complainant, Zar Khan, said that the militants, who had fled from Adezai area, were involved in the blast.Some of those charged in the case include Alamgir, Aurangzeb, Jangrez, Roohul Amin, Mustafa, Akbar Shah, Bilal, Saifullah, Ghufran, Shahid, Raj Wali, Junaid, Shiraz, Abid, Ihsanullah and Janas. It was learnt they had also been charged in the attacks carried out on the volunteers in the past.An official of Matani police station said that a team headed by a senior investigation officer, Riaz Khan, was probing the case.However, SP Abdul Kalam Khan, when contacted, said that the investigation committee formed by the capital city police officer would be led by SSP Investigations Peshawar.“A deputy superintendent of police and officials from other agencies will also be a part of team to work on different angles,” he added.He said that police were following some clues, however, it would be premature to disclose something at this stage.Another official said that some suspects had been arrested but it was not clear if they were involved in the blast or not – Dawn