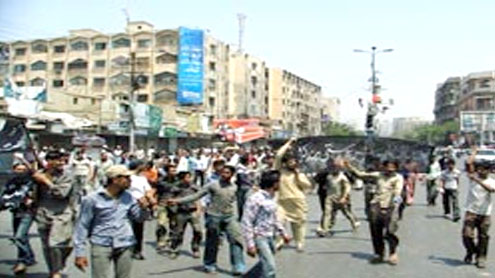 KARACHI: A large number of traders on Thursday staged a protest demonstration at MA Jinnah Road to express resentment against the extortionist mafia of Karachi.The traders of Tyre Market, Aurangzeb Market, Akbar Market and Jamia Cloth Market closed their shops and took part in the protest march that started from MA Jinnah Road and ended at Bolton Market.They expressed their growing disenchantment against the extortionists and law enforcement agencies (LEAs).

They said the LEAs have not only failed to provide proper security to the traders so far but they also have appeared toothless to avert such incidents. The traders said that they are regularly receiving threats to pay extortion money or face consequences.“Despite several complaints with police and other concerned departments, the government has failed to provide security to the shopkeepers,” they regretted.The protesters, chanted slogans against lawlessness, extortion threats and firing incidents and blocked the Main MA Jinnah Road by burning tyres.Meanwhile, the police and administration officials rushed to the spot and started negotiations with the protestors.SP Qamar Raza Jasqani said the police have assured the traders of complete security by establishing check-posts across all trading units of Saddar area. He said the authority concerned in this regard is striving to evolve a comprehensive strategy to deal extortionists with an iron hand. After the security assurance given by the concerned authority, the traders dispersed peacefully.﻿ – Dailytimes