by ToP
in Pakistan
5 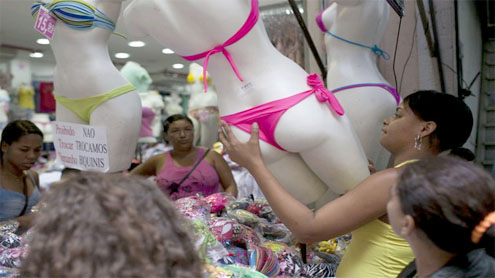 RIO DE JANEIRO: Tall and tan and young and … chunky?The Girl From Ipanema has put on a few pounds, and for many sunbathers on Brazil’s beaches the country’s iconic itsy-bitsy, teeny-weeny bikini just doesn’t suffice anymore.

A growing number of bikini manufacturers have woken up to Brazil’s thickening waistline and are reaching out to the ever-expanding ranks of heavy women with new plus-size lines.That’s nothing short of a revolution in this most body-conscious of nations, where overweight ladies long had little choice but to hit the beach in comely ensembles of oversized T-shirts and biker shorts.”It used to be bikinis were only in tiny sizes that only skinny girls could fit into. But not everyone is built like a model,” said Elisangela Inez Soares as she sunbathed on Copacabana beach, her oiled-up curves packed into a black size 12 bikini.

“Finally, it seems like people are beginning to realize that we’re not all Gisele,” said the 38-year-old mother of four, referring to willowy Brazilian supermodel Gisele Bundchen.Clothing designer Clarice Rebelatto said her own swimwear-hunting travails prompted her to found Lehona, an exclusively plus-size beachwear line.”Honestly, the problem went way beyond just bikinis. In Brazil, it used to be that if you were even a little chunky, finding any kind of clothes in the right size was a real problem,” said Rebelatto, herself a size 10. “And I thought, ‘I’m actually not even that big compared to a lot of women out there, so if I have problems, what are they doing?'”

Since its launch in 2010, the line has become a hit.In brash leopard spots and flower prints not meant for wallflowers, the label’s 14 bikini styles aren’t what you’d normally associate with plus-size swimsuits. The necklines plunge dramatically. Straps are mere strings. And while the bottoms provide too much coverage to qualify for the famed “fio dental” or “dental floss” category of Brazilian string bikinis, they’re significantly more audacious than the standard U.S. cut.”We’re working from the principle that bigger women are just like everyone else: They don’t want to look like old ladies, wearing these very modest, very covering swimsuits in just black,” said Luiz Rebelatto, Clarice’s son and director of Lehona.

He said that recent publicity of the brand and several other new swimwear lines catering to plus sizes has triggered an overwhelming number of calls and e-mails from would-be customers.”They’re all excited and they say, ‘I’ve been looking everywhere for a bikini like that. Where can I get one?'” said Rebelatto.Lehona is currently sold exclusively at big and tall specialty stores throughout Brazil. Its bikinis retail for about 130 reais or $75 — a relatively high price-point here, but Rebelatto said sales have grown at a galloping pace, though he did not provide any figures.

It’s the same story at Acqua Rosa, a conventional swimwear label that added a plus-size line in 2008. Now, plus-size purchases account for more than 70 percent of the brand’s total sales, said director Joao Macedo.It makes sense.For centuries, large swaths of Brazil were beset by malnutrition, and in 1970, nearly 10 percent of the population in the country’s poor, rural northeast region was considered underweight, according to Brazil’s national statistics institute.But the phenomenal economic boom that has lifted tens of millions out of poverty and into the burgeoning middle class over the past decade has also changed the nation’s once-svelte physique: A 2010 study by the statistics institute showed that 48 percent of adult women and 50 percent of men are now overweight. In 1985 those figures were 29 percent for women and 18 percent for men.

(Still, there’s been no rash of plus-size male swimwear lines, as men here wear Speedo-style suits that don’t impinge on big guts.)Analysts attribute Brazil’s rapidly widening girth to changes in nutrition, with chips, processed meats and sugary soft drinks replacing staples like rice, beans and vegetables.And while the country’s elite are widely known to be fitness freaks — and also among the world’s top consumers of cosmetic surgery — those recently lifted out of poverty and manual labor are becoming increasingly sedentary. A 2008 study showed that barely 10 percent of Brazilian teens and adults exercise regularly.

Still, despite their growing numbers, not everyone is eager to embrace “gordinhas” — or “little fatties,” as chunky women are affectionately known here.Many high-end bikini-makers have turned a seemingly deliberately blind eye to the burgeoning plus-size market. Rio-based upmarket brand Salinas, for example, offers five sizes, from extra-small through extra-large. But their sizing runs notoriously small and it’s hard to imagine anyone over a size 6 actually managing to fit into any of the brand’s minuscule two-pieces.Luis Rebelatto of Lehona chalked it partially up to snobbery.

“Some brands, they don’t want their image to be associated with chunky women,” he said. “Only the thin, the rich and the chic.”While Brazilians’ increasing heft is a public policy preoccupation for the government, growth in the ranks of the overweight population has given them increased visibility in Brazilian society. Extra-wide bucket seats for the obese have been installed in Sao Paulo’s metro system, and on Sunday the city will host Brazil’s first ever Miss Plus Size beauty contest.

“It used to be that people would stare at me,” said Soares, the voluptuous sun-worshiper on Copacabana beach. “Now when I come to the beach I see women who are much bigger than me — and lots of them are wearing bikinis — so I’m not self conscious any more.”God makes some people thin but he made me like this,” she said, rubbing down the well-oiled bulge of her stomach and thighs. “So who am I to think that he was wrong?” – Yahoonews