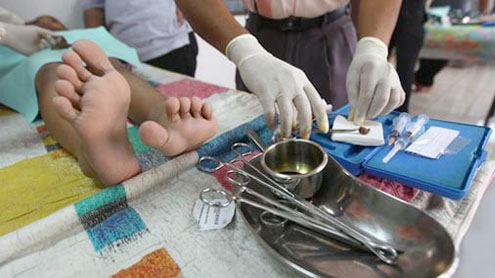 Half of all cancers

Smoking is blamed for a third of all US cancer cases and being overweight leads to another 20 percent of the deadly burden that costs the United States some $226 billion per year in health care expenses and lost productivity.

For instance, up to three quarters of US lung cancer cases could be avoided if people did not smoke, said the article in the US journal Science Translational Medicine.Science has shown that plenty of other cancers can also be prevented, either with vaccines to prevent human papillomavirus and hepatitis, which can cause cervical and liver cancers, or by protecting against sun exposure, which can cause skin cancer.Society as a whole must recognize the need for these changes and take seriously an attempt to instill healthier habits, said the researchers.

“It’s time we made an investment in implementing what we know,” said lead author Graham Colditz, an epidemiologist at the Siteman Cancer Center at the Washington University School of Medicine in St. Louis, Missouri.Exercising, eating right and refraining from smoking are key ways to prevent up to half of the 577,000 deaths from cancer in the United States expected this year, a toll that is second only to heart disease, according to the study.But a series of obstacles to change are well enshrined in the United States, which will see an estimated 1,638,910 new cancer cases diagnosed this year.

Those hurdles include skepticism that cancer can be prevented and the habit of intervening too late in life to stop or prevent cancer that has already taken root.Also, much of the research on cancer focuses on treatment instead of prevention, and tends to take a short-term view rather than a long-term approach.“Humans are impatient, and that human trait itself is an obstacle to cancer prevention,” said the study.

Further complicating those factors are the income gaps between the upper and lower social classes that mean poor people tend to be more exposed to cancer risk factors than the wealthy.“Pollution and crime, poor public transportation, lack of parks for play and exercise, and absence of nearby supermarkets for fresh food hinder the adoption and sustained practice of a lifestyle that minimizes the risk of cancer and other diseases,” said the study.

“As in other countries, social stratification in the United States exacerbates lifestyle differences such as access to health care, especially prevention and early detection services.“Mammograms, colon screening, diet and nutrition support, smoking cessation resources and sun protection mechanisms are simply less available to the poor.”That means any bid to overcome deep social imbalances must be supported by policy changes, said co-author Sarah Gehlert, professor of racial and ethnic diversity at the George Warren Brown School of Social Work and the School of Medicine.

“After working in public health for 25 years, I’ve learned that if we want to change health, we need to change policy,” she said.“Stricter tobacco policy is a good example. But we can’t make policy change on our own. We can tell the story, but it requires a critical mass of people to talk more forcefully about the need for change.”A separate annual report by the Centers for Disease Control and Prevention and other major US cancer groups found that death rates from cancer in the United States continued to decline between 1.3 and 1.7 percent from 1998 to 2008.

New cancer diagnoses also decreased less than one percent per year from 1996 to 2006 and leveled off from 2006 to 2008.However, the Annual Report to the Nation on the Status of Cancer also highlighted the problem of obesity-related cancers, such as colorectal cancer, as well as cancer of the kidney, esophagus, pancreas, breast and endometrial lining.“If you watch your diet, exercise, and manage your weight, you can not only prevent your risk of getting many lethal forms of cancer, you will also increase your chances of doing well if you should get almost any form of cancer,” counseled Edward Benz, president of the Dana-Farber Cancer Institute in Boston. – Khaleejnews