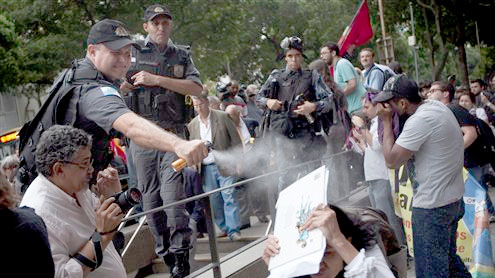 Former officers have gathered every year to mark the occasion, but now they’re facing a growing tide of opposition and had to push through about 200 people screaming “murderer” and holding up photos of those killed during the regime.Unlike Argentina, Chile and Uruguay, which also had repressive military regimes, Brazil has never had a formal investigation into human rights abuses during its 1964-85 dictatorship. A 1979 amnesty law barred prosecutions for politically motivated crimes committed during the regime.

“Brazil is so far behind on this. This is our history, and it’s not told,” said protester Maria Auxiliadora Santa Cruz Coelho, the sister of a young student activist who was detained in 1974 by the military and never seen again.Those who lived it won’t forget, she said. “My mother is 98 years old, and she doesn’t want to die without knowing what happened to her son. This has been her life.”The emotional crowd outside the Military Club contrasted starkly with the aging officers in dark suits who filed into the high-ceilinged hall to hear speakers extoll the growth of Brazil during the military years and deride the accusations of demonstrators.

“They want to discuss police matters,” one speaker, Aristoteles Drummond said of the critics. “There must have been excesses on both sides. We know theirs. They’re so insistent that there must have been some on our side as well, but they were marginal.”In the audience, a former army general, Gilberto Serra, waved aside the idea of government responsibility for any murders. The armed forces, he said, had an important job to do: “They were the ones who blocked the implementation of a communist government here in Brazil.”A recent study by the Brazilian government said 475 people were killed or “disappeared” by agents of the military regime. It said many more were tortured.

Thursday’s protest was the latest of several recent efforts seeking to push Brazilians to face their past. Across the country, groups of civilians denounced former torturers in six cities Monday, spray-painting messages such as “A torturer lives here” in front of their homes and using whistles in noisy demonstrations to draw attention to their targets.”We have a right to our history, and the only way that’s going to happen is if the people take charge,” university student leader Esteban Crescente said outside the Military Club. “We have to go to the streets to drive this process.”Federal prosecutors are looking for ways around the amnesty law.

Earlier this month, they filed kidnapping charges against retired army Col. Sebastiao de Moura trying him to the junta era disappearance of 62 communists, arguing that cases of forced disappearances don’t fall under the amnesty law. A federal judge dismissed the charges, but prosecutors said they would appeal.Brazilians also have been debating the creation of a truth commission to investigate crimes committed under the dictatorship. The bill was signed into law in November by President Dilma Rousseff, who herself was jailed and tortured by the junta, but it still faces resistance from conservative groups, including retired military personnel.

Jose Miguel Vivanco, who heads the Americas division of Human Rights Watch, says the protests and a truth commission, are ultimately no substitute for the justice that Brazil should provide for the junta’s victims.”Brazil has a duty under international human rights law to bring to justice those individuals who committed atrocities and to provide a remedy for the victims,” he said. “Taking seriously the right of victims to a remedy is also key to strengthen the rule of law in Brazil and make clear that everybody has the same legal duties and protections, whether civilian or military.” – Yahoonews