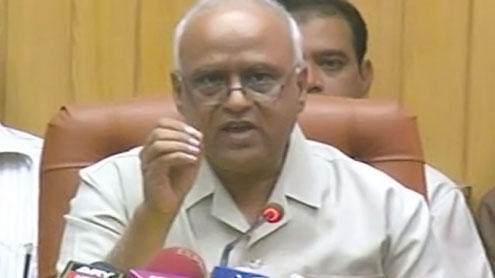 Akhtar is considered very close associate of Railways Minister Haji Ghulam Ahmed Bilour. Gilani had reappointed him as GM Operations on a one-year extension which was likely to be extendable for another year. The Railways Ministry had issued a notification for his reappointment on Monday. Akhtar had retired from service on March 2 after reaching the age of superannuation. Sources said Akhtar was arrested over alleged misuse of authority and other charges in relation to a multi-billion scrap scandal. It is also merit mentioning that he has been hired as GM thrice.

The NAB, on the orders of the Supreme Court, had initiated the investigation into alleged disposal, in clear violations of prescribed rules, of 39,000 metric tons of scrap valued at more than Rs 300 million. It was claimed that when the tenders were awarded, the rate of scrap was around Rs 37, 000 per metric tonne, while the Railways auctioned it for Rs 28, 700.Sources said some accused, including the PR officials and contractors, had already been arrested, adding that some of them were released on bail after depositing back the plundered money.

“Railways Minister Ghulam Ahmed Bilour and former secretary Samiul Haq Khilji were also named in the scrap scandal,” they said.NAB Chairman Admiral (r) Fasih Bokhari had established a Special Operations Division to investigate the cases against Akhtar.According to the sources, Akhtar, after receiving the notification for his new posting, proceeded to Islamabad by road for an emergency meeting where he was called by the NAB office and taken into custody.

However, Akhtar was refuting allegations against him, saying he had no role in the scrap issue and was innocent, as all charges were baseless.Saeed Akhtar, a civil engineer by profession, is serving the department for 38 years. In his tenure, he had held the positions as federal government inspector railways, GM (Operations), AGM infrastructure, chief engineer, project director doubling of track, DS Multan, director technical ministry of railways and various other positions

Akhtar is considered a pioneer in introducing public-private partnership in the utility. He started two trains, Business Express and Shalimar Express, with the cooperation of private companies. He enjoys a good reputation among majority of the PR officers. – Nation