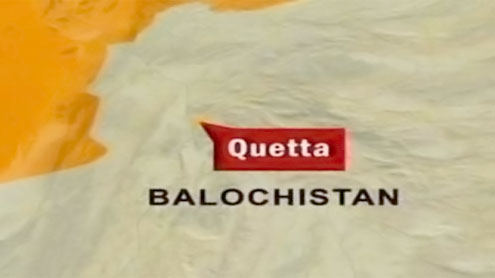 QUETTA: In yet another sectarian targeted killing, six people belonging to Hazara community were shot dead and three others were left with serious injuries when armed men ambushed a shop on Prince Road of Quetta on Monday night.

Unidentified masked men riding a motorbike sprayed a volley of bullets on a shoe-making shop located on busy Prince Road in the Quetta city centre with sophisticated weapons.Resultantly, six people were killed instantly and three others sustained serious injuries. The assailants escaped from the scene after committing the crime. Police and other law-enforcement agencies rushed to the site soon after the incident and cordoned off the area. The injured and dead were shifted to a nearby hospital. The sources in hospital said that the condition of injured was not stable.

The deceased were identified as Qurban Ali, Muhammad Hussain, Muhammad Kareem, Yawar, Shabbir and Syed Ahmed while the injured were identified as Irshad, Lali and Younus.‘Police are raiding different places in the City to arrest the culprits of this tragic incident’, DIG Operations Qazi Abdul Wahid told the media persons and confirmed that six people had been killed and three others wounded. ‘Some workers hailing from Hazara community were busy in the shoe-making shop when armed men opened indiscriminate firing on them’, another police official said, adding, that the incident appears to be a case of sectarian targeted killing.Soon after the incident a large number of people belonging to Hazara community rushed to the Civil Hospital and blocked the Jinnah Road.Some, infuriated protesters ransacked hospital, pelted vehicles with stones and carried out aerial firing.

Owing to tensed situation, a heavy contingent of police and Frontier Corps were rushed to Jinnah Road and the injured were shifted to Combined Military Hospital.Meanwhile, Tahafuz Azadari Council and Hazara Democratic Party have strongly condemned the killing of innocent people and demanded for immediate arrest of the culprits. They have announced three-day-mourning over the tragic killings.Meanwhile, four people, including two Punjabi-speaking persons, were shot dead in separate incidents in Turbat and Jaffarabad districts on Monday.On the other hand, two more bullet-riddled bodies have been recovered from Khuzdar.

According to police, unidentified armed bike riders opened indiscriminate fire on two passengers in Mand area of Turbat, located near Pak-Iran border. As a result, Qaiser and Asif Javed received critical wounds and succumbed to their injuries instantly, while the murderers fled the scene soon after committing the crime.Police say it could be another case of targeted killings as the victims belonged to Lahore and Sargodha towns of Punjab and they were waiting for Karachi-bound bus at a terminal when a the time of the attack.The bodies were sent to their native towns after completion of legal formalities.Meanwhile, two bullet-riddled bodies were found in Khuzdar district, some 360 km southeast of Quetta.

According to officials, local people informed the levies about the bodies dumped in the Lakhurain area. The levies personnel rushed to the site and moved the dead bodies to a local hospital for autopsy where they were identified as Abdul Wahab, resident of Zehri, and Shah Nawaz from the of Peshk area of Khuzdar.“The bodies of both the victims were having multiple bullet wounds,” levies sources said, adding that it was yet to be ascertained whether the victims were among the missing persons and who was behind these killings.In another shooting incident, two people were killed in an armed clash between two groups in Usta Muhammad town of Jaffarabad district.Police said the armed clash erupted between two tribes in Goth Barkhat Buledi over cutting trees. Resultantly, Mir Hassan and Ali Jan were killed in the shooting. After the incident a heavy contingent of police rushed to the site and moved their bodies to hospital for post-mortem. – Nation