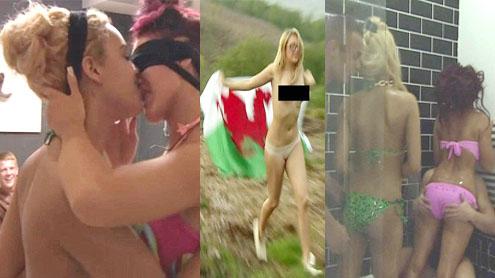 Its predecessor Geordie Shore horrified many Newcastle residents with their city’s on-scene depiction.

So it was unsurprising to find Welsh viewers have been equally disgusted following the premiere of new MTV reality show The Valleys on Tuesday.While some appeared to find the scandalous antics entertaining, a lot of Twitter followers were aghast at what they were watching.Showbiz correspondent Simon Thompson tweeted: ‘Wow! The Valleys. Wales not happy. As a Welshman, I am appalled. Makes Mark Wright’s Hollywood Nights look like Downton Abbey. Ashamed.’

Another Twitter user Shannon Stevens wrote: ‘The Valleys made me so embarrassed I don’t want to live in this country anymore.’Ahead of the show’s broadcast, it was condemned by Charlotte Church: ‘I won’t be watching as I think it will be exploitative and a horrific representation of the country that I love.’Rhondda MP Chris Bryant told Wales Online: ‘It’s called The Valleys but it doesn’t happen in the Valleys, it happened in Cardiff. It’s all about people getting very drunk and being as deliberately outrageous as they possibly can be. That’s not what the Valleys are like.The show sees nine young people from the Valleys of Wales re-located to bustling Cardiff, sharing a luxury flat and balancing their new jobs with a colourful social life.

In the opening scenes of the series, one housemate managed to insult a lot of viewers from her hometown and surrounding areas by complaining: ‘There’s nothing in the Valleys, it’s s**t.’Guiding the youngsters are their two mentors Anna Kelle and Jordan Reed, who hope the group will ‘prove they are not typical Valleys kids’.However, during the 43-minute long episode, Jordan later concedes: ‘I was expecting some diamonds in the rough, but I had forgotten how rough the Valleys is.’In the first episode, it doesn’t take long for self-described Beyonce lookalike Lateysha Grace, 19, from Port Talbot, to be unfaithful to her long-term boyfriend as she kisses both her male and female housemates.

When asked if she would be staying faithful, she replied: ‘Er, no, I don’t think so.’It isn’t long before Latesyha has upset her fellow housemates by declaring: ‘I know I’m better looking than the other girls.’Hairdresser Nicola Morris, 19, performs the episode’s most shocking moment, when she pees in front of housemates Latesyha, Leeroy Reed and Darren Chidgey during a group shower session.Call centre worker Carley Belmonte, 21, wastes no time in getting naked, while Aron Williams strips down to his underwear.

Law graduate Jenna Jonathan, who was bought a £4,000 breast enhancement for her 18th birthday by her parents, managed to horrify her mother and father with her raunchy beach photoshoot.Jenna, 21, from Tonyrefail, shoves her assets in co-star Darren’s face as they romp on the beach for the shoot.Despite her education, she admits she wants to become a glamour model, declaring: ‘I want to use my body, not my brains.’Her photoshoot co-star Darren is on the same page: ‘I moved to Cardiff to become an underwear model. I’ve definitely got the body for it.’

The show’s ‘nice boy’ Liam Powell, 26, reveals his homosexuality to his housemates, which goes down well with the female housemates.However, Bridgend bricklayer Darren said: ‘I would never have said it was gay, on the plus side more f**ny for us.’However, Tredegar student Aron, 19, wasn’t so sure: ‘I believe him, but I don’t like it.’Following Tuesday’s debut, Twitter was awash with comments – both positive and negative – from Welsh viewers and celebrities.TV presenter Jonathan Ross admitted he found the show ‘awesome’, but his wife Jane Goldman was unimpressed.He tweeted: ‘Just turned over to The Valleys. Awesome. My wife disagrees…’My wife has made me turn over from The Valleys. Now I’ll never know what happens to the girl (Nicole) who peed on her friends in the shower. Damn.’ – Dailymail