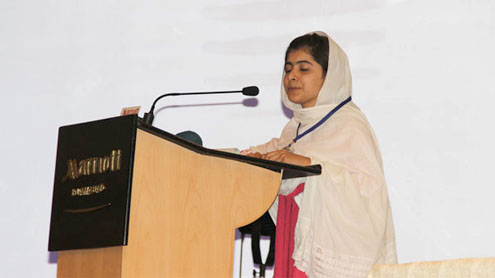 PESHAWAR: National Peace Award winner and young Pakistani rights activist Malala Yousufzai and another girl were injured in an attack on their school van by unidentified gunmen on Tuesday.

Malala was returning home from her school in Swat’s Mingora area when her van was attacked by unknown men.Certain media outlets reported that the gunmen attacked the van on identifying the young children’s rights activist.Sources said Malala was hit by couple of bullets to her neck and head.Both injured girls were taken to the Saidu Sharif Hospital. According to doctors, Malala was now out of danger. However, Prime Minister Raja Pervez Ashraf has ordered to shift her to a Peshawar hospital swiftly through a helicopter. The prime minister has strongly condemned the incident.

The incident spread fear and panic among the local residents.Khyber Pakhtunkhwa Information Minister Mian Iftikhar Hussain confirmed the shooting and blamed the attack on terrorists.Yousafzai is 15 years of age and has already earned international fame for raising voice against Taliban oppression in Swat.She was honoured with a first ever National Peace by the government and was nominated for the International Children’s Peace Prize by advocacy group KidsRights Foundation in 2011 for being an inspiration to her friends by standing up against repression as her namesake did in Afghanistan in the 19th century.

Malala became the voice of all the girls in Swat when she began maintaining a diary on the website of the BBC under the pen name of “Gul Makai.”The Pakistan army in 2009 effectively crushed a two-year Taliban insurgency in Swat where cleric Maulana Fazlullah presided over a brutal campaign of beheadings, violence and multiple attacks on girls’ schools.After fierce fighting displaced around two million people, the army declared the region back under control in July 2009.Despite sporadic outbreaks of violence, the government has since tried to encourage tourism in Swat.It had been popular with Pakistani and Western holidaymakers for its stunning mountains, balmy summer weather and winter skiing. – Dawn

Obama has failed to lead in Syria: Romney