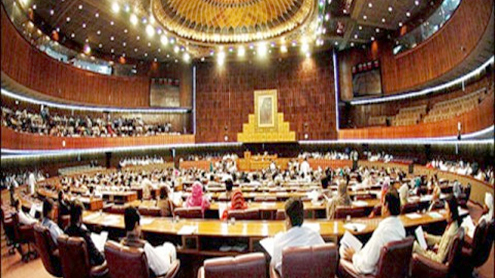 ISLAMABAD: The ruling PPP in Tuesday’s National Assembly session explicitly stated that none of the government departments had the authority to declare the Ahmadis and Qadianis as Muslims.

“There has been no change in the government’s policy. And in the light of the Constitution, the Ahmadis and Qadianis are never treated as Muslims,” Defence Minister Naveed Qamar said clarifying the concerns voiced by an Opposition member, JUI-F leader Maulana Attaur Rehman, on a point of order. The House on its first private members’ day of the 48th session disposed of less than half of agenda items, while the verbal duel on Kalabagh Dam issue and compressed natural gas crisis remained dominant. Referring to media reports, JUI-F’s Attaur Rehman drew the attention of the House to an event organised by the Pakistan Embassy in the US to counter a blasphemous film, where the Ahmadis and Qadianis were taken as Muslims.

“Aren’t the embassies under the Constitution? Have they been given a free hand to undertake such activities,” questioned Rehman, and warned that if a proper action was not taken, they would be forced to raise the issue outside Parliament. Promising a probe into the matter, Defence Minister Naveed Qamar said the Qadianis and Ahmadis were never treated as Muslims. “No government functionary could go against the Constitution, nor did any change come to the government’s policy to this effect,” he clarified. When the matter of Kalabagh dam came under discussion, with a particular reference to a recent Lahore High Court verdict, treasury members hinted that the ruling reflected the PML-N leadership’s influence.PPP’s Gul Muhammad Jhakrani pointed out that three provinces had already presented their stance against the dam’s construction, but the PML-N was having dual standards over it.

Another PPP lawmaker, Shazia Marri, said the question of consensus on the dam was out of question after the three provinces’ opposition. Upon this, PML-N’s Khawaja Saad Rafique affirmed that his party did not adopt dual standards, but just called for building a consensus over the KBD issue. “Without consensus it would be harmful,” he added.Taking the floor, ANP’s Bushra Gohar, on a point of order, sought a debate on Punjab Governor Latif Khosa’s statement against the 18th Constitutional Amendment. She said the governor must secure a retraction over his statement.  Also, the chair, Deputy Speaker Faisal Kareem Kundi, referred back the amendment of PML-N Anusha Rahman to the Standing Committee on Rules and Privileges, when it was pointed out that it had been fine-tuned. It would be brought back on the next private members’ day.

Responding to a call-attention notice regarding the stoppage of 5 per cent allowance to labourers out of the annual profit of factory owners, PPP’s Khursheed Shah insisted that the allowance was not stopped. Meanwhile, the assembly admitted a bill for establishing a permanent commission to ensure protection and welfare of children. The proposed commission will take custody of children over five years and less than 15 years of age and arrange funds for their welfare. Two more bills – a bill to amend the Pakistan Penal Code, 1860, and the code of criminal procedure, 1898; and a bill to amend Medical and Dental Council Ordinance, 1962 (Medical and Dental Council Bill, 2012) – were introduced in the House. – Nation