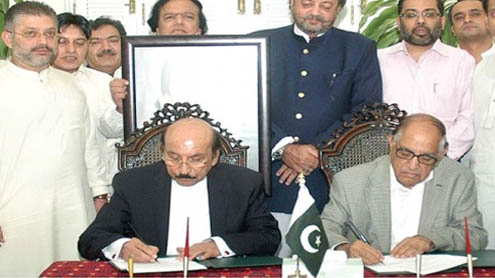 As Sindh Governor Dr Ishratul Ebad signed the recommendation sent to him by the CM and opposition leader to nominate Justice (r) Alvi for the slot of caretaker CM, who will take oath today on Friday.Sindh Chief Minister Qaim Ali Shah and Opposition leader of Sindh Assembly from MQM, Sardar Ahmed while addressing a joint press conference at the CM House made the announcement of nominating Justice (r) Zahid Qurban Alvi as caretaker CM.The teams of PPP and MQM led by Sindh Chief Minister Qaim Ali Shah and Governor Dr Ishratul Ebad after several rounds of talks reached on consensus by choosing Alvi for the slot of caretaker CM.

Addressing the media they said, “We are making history today by completing the tenure of elected assemblies and smooth transition towards elections.”Shah said that under the article 224 (1)-A of the Constitution, the decision to choose the caretaker CM was left with the leader of the House and leader of opposition, so they had done it unanimously. He termed completing the tenure of assemblies for peaceful transition towards election and nominating the caretaker CM unanimously historical occasions.Qaim said that justice (r) Zahid Qurban Alvi was an honest and neutral person. He hoped that new caretaker CM will ensure fair and free elections in the province.

The CM thanked President Asif Ali Zardari and MQM’s chief Altaf Hussain, who took every decision in the interest of the province. The name of the Zahid Qurban Alvi was suggested by the ruling PPP while MQM supported it.Earlier, the Justice (r) Deedar Hussain Shah, Justice (r) Hamid Mirza from PPP, while five names of PPP were came under discussion but the two sides after lengthy discussion picked Justice (r) Zahid Qurban Alvi for the slot of interim chief minister.

On this occasion, Opposition leader of MQM in the Sindh Assembly Sardar Ahmed reminded that PPP and MQM started journey of brotherhood and reconciliation after Asif Ali Zardari’s visit to MQM’s secretariat and remained together in the government for five years despite problems and criticism from certain quarters.Through nominating the caretaker chief minister unanimously, we are making history today towards smooth transition of power, Opposition leader said, adding the PPP and MQM took decision on caretaker cm with unanimity and consensus.To a question, the chief minister said that Zahid Qurban Alvi remained non-partisan in his career as judge and earned a good reputation, besides he would have support of election commission of Pakistan for fair and free elections.

To a question of at least 7,000 people were killed in the Karachi in five years, while government declaring the completion of government as historical, the CM said that the offences in the Karachi is reaction of war on terror, saying that the police and rangers made arrests and detected several cases, besides 700 cases were sent to the courts. Qaim said that though the government is responsible for loss of each life, no one asking about Punjab where 19,000 people were killed while everyone asking on 7,000 killings in the Karachi.

However, the notification has been issued for nomination of caretaker CM Zahid Qurban Alvi, who will take oath by the governor at Governor House on Friday.Meanwhile, PPP and MQM jointly finalised the names of the dozen-member caretaker cabinet with 40 percent representation from MQM, while remaining would be nominated from PPP, besides a nominee of Sunni Tehreek is likely to be made part of interim cabinet.Though, the CM and Opposition leader claimed that other opposition parties in the Assembly were taken into confidence. But PML-F, NPP and PML-Likeminded refuted the claims, saying that they were not consulted as names suggested by them for interim cm were not considered either side of chief minister or opposition leader of MQM.

PROFILE: The nominated caretaker chief minister of Sindh Justice Zahid Kurban Alvi was born on August 21, 1941 in Karachi. He passed Matriculation from St Patrick’s School and Intermediate Examination from St Patrick’s College, while he did his graduation from the University of Sindh, Jamshoro and obtained degrees of Bachelors of Law and Masters in International Relations.He started law practice after graduating in Law in June, 1966.Alvi posted as judge of Sindh High Court on May 5, 1998 and was retired as judge on August 8, 2003. Alvi took oath under former Army Chief Pervez Musharrf’s first PCO (Provisional Constitutional Order) in 2000 as Sindh High Judge.

Besides, Zahid Qurban Alvi was appointed tribunal chief to probe the breach occurred in Indus River at Guddu Barrage in 2010 floods is natural or manmade. But in his findings, Alvi tribunal declared the breach in the Indus River as natural, which caused relief of sigh for the PPP government.Besides, in his findings on Baldia Factory in Karachi, in which over 250 people were burnt alive, Alvi Tribunal declared that the fire in factory was due to short-circuit of electricity. After retirement, Alvi remained close with the PPP leadership, so he was appointed as tribunal head to probe issues of breach occurred in the floodwater and Baldia factory. – Nation