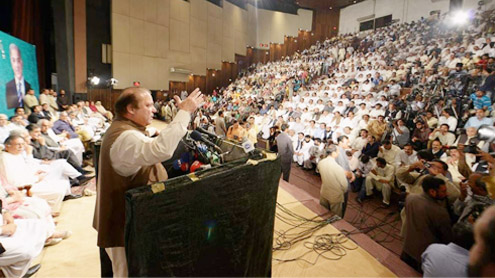 He was speaking to the meeting of newly elected MNAs and MPAs , who have won elections on PML(N)’s ticket. He said that the government of PML(N)would cut off 30 percent expenditure as the succession of lavish luxuries would not be continued on the money, which the country takes as debts.He said that the people would know about the right direction of the PML(N)’s government and feel the difference within 30 days. However he refused to give any specific deadline for eliminating load shedding.

He said that the nation has wasted 65 years in political clashes and leg pulling. Now it is the high time to set new traditions by smooth transfer of power. The people are looking for that Pakistan where meal of three times, self respect and other facilities are available to them.Nawaz Sharif said that Taliban’s offer for talks should be taken seriously as every issue could not be resolved through use of power and bullet.

Nawaz Sharif said that an elected government has every right to complete its constitutional tenure according to the mandate given by the people. Now the episodes of toppling governments by coming on the streets should be closed forever.“We won with huge margins and lost with narrow margins,” he said. He said he was happy that previous parliament had completed its tenure; adding the tradition to overthrow governments through agitations must now come to end now.“Civilized nations follow the constitutional means for change and I am proud that in Pakistan transfer of power took place in a peaceful and democratic way,” he said, adding this process should continue.

About the election campaign he said PML-N did not resort to any negative campaigning and gave only positive message to the masses for change.Nawaz Sharif said his party has accepted the mandate of all political parties in general elections. He said his party had the opportunity to form government in Khyber Pakhtunkhwa with the help of other parties but after the elections we announced it is the right of single largest party to form the government there.He said his party will form government in Balochistan to resolve the problems of the province.

The PML (N) Chief said PPP and MQM have got mandate in Sindh and they should form government there and focus on good governance and law and order situation.Nawaz Sharif said his party has already started work to resolve the problems faced by the people. He said that it will take months not years to complete the work. He hoped that the people will feel positive change in the first hundred days of his government.Nawaz Sharif said 30 percent expenditure of the government will be curtailed. He said it will be effort of his government to end load-shedding at minimum possible time. He said the first priority of his government would be to solve the problem of loadshedding as soon as possible.  “Our government would be focused on problems of security and energy,” he said.

He urged the leaders and workers of PML-N to devote their time for the welfare of masses because people of Pakistan had great expectations from them.“You have seen the end of those who lost contact with the masses while in government,” he said.He urged his rivals to rise above narrow political objectives and work for the stability and progress of the country. – OnlineNews