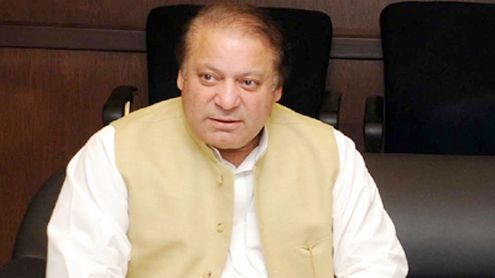 ISLAMABAD: Prime Minister, Muhammad Nawaz Sharif on  Friday directed the Intelligence Bureau (IB) to keep a vigilant eye on terrorists, their cohorts and other criminals to  realize the collective goal of peace and  security in the country.

He also gave directions that IB should augment its country wide intelligence network by maintaining coordination with all other security  agencies as well as provincial law enforcement bodies.

Such an approach, he said would greatly help in maintaining law and order.The Prime Minister stated this during a meeting with Aftab Sultan, Director General and other senior officials of IB here who briefed him about the working of Intelligence Bureau, its strategy to thwart criminal activities  with a special focus on nabbing terrorists and anti-state elements.The DG also apprised the Prime Minister about IB’s efforts to resolve various cases including recovery of the kidnapped minor girl in Karachi and arrest of criminals involved in bomb attack on Justice Maqbool Baqir.

Giving details about the recovery of a minor girl, Mahi Suchdev, DG  IB said the girl was kidnapped in Karachi. IB Karachi conducted an operation  in coordination with AVCC Police and CPLC and was able to locate the hideout of the kidnappers in Neelam Colony, Clifton on 19th July.  After encounter with the kidnappers, the minor girl was safely recovered.Regarding the attack on Justice Maqbool Baqir, the DG IB said that following an actionable lead from sources, an operation was carried out and  one Masoom Billah, from Gulistan-e-Jauhar, Karachi was apprehended.

Masoom Billah’s arrest was the biggest breakthrough in the case of attack on Justice Maqbool Baqir. He was not only the head of the Lashkar-e-Jhangvi’s secret death squad but also the executor of the bomb attack on Justice Maqbool Baqir.Ultimately other criminals involved in this case were also apprehended.The Prime Minister appreciated IB’s efforts in resolution of these cases and desired that such vigilance must always be maintained for keeping criminal and anti-state activities in check.

The Prime Minister on this  occasion also referred to the briefing by the Ministry of Interior last week where he stressed that restoration of peace and elimination of terrorism should be our top most priority. The security agencies including the IB have to come up with effective intelligence to prevent terror attacks, the Prime Minister said. He added that as provision of adequate funds for the law enforcement agencies have already  been assured, they must also deliver to the expectations of the people and the government. – APP