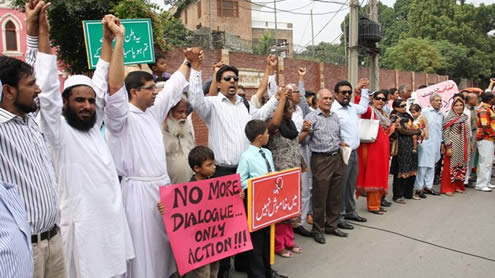 LAHORE: In a show of solidarity with Christians, Muslims formed a human chain outside St Anthony’s church here during mass to act as a shield for those attending Sunday mass inside the building.

The initiative was led by ‘Pakistan for All’ – a group of citizens concerned about growing attacks on minorities, as part of their stand against the Peshawar church blast that killed at least 83 people on September 22.

The twin suicide attack on churches occurred after Sunday mass ended and is believed to be the country’s deadliest attack on Christians. On September 28, Muslims attended Sunday mass at St Patrick’s Cathedral in a similar show of solidarity and clasped their hands in prayer and sang from the hymn opus. Dozens of civil society members, religious scholars, politicians, artists and academics had stood vigilant for the duration of the mass and later linked their arms to from a symbolic human shield around the church to express their “defiance to the extremist forces and solidarity with the minorities”. – Dailytimes