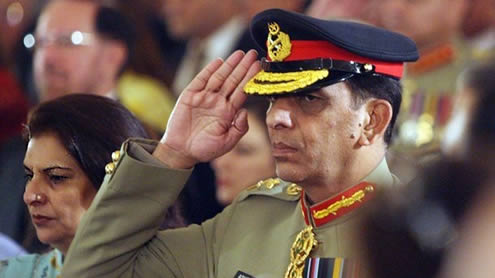 RAWALPINDI: Responding to the media reports about his future, Chief of the Army Staff (COAS) General Ashfaq Parvez Kayani said on Sunday that his tenure would end on November 29, and he would retire on that day.

Gen Kayani, in a statement issued by ISPR here, said, “For quite some time, my current responsibilities and likely future plans have been debated in the media with all sorts of rumours and speculations doing the rounds. The subject of being entrusted with new duties has also come up in several reports. “I am grateful to the political leadership and the nation for reposing their trust in me and Pakistan Army at this important juncture of our national history. However, I share the general opinion that institutions and traditions are stronger than individuals and must take precedence.”

General Kayani said, “As I complete my tenure the will of the people has taken root and a constitutional order is in place. The armed forces of Pakistan fully support and want to strengthen this democratic order. “Pakistan Army has made its contribution towards this desired end with complete clarity of mind and a comprehensive understanding of the trajectory Pakistan needs to take. They have also proven, on countless occasions, through their priceless sacrifices that the defence and prosperity of Pakistan is their highest priority.”

The COAS said that he had served a great nation and had the privilege of commanding the finest army of the world for six years to the best of his abilities and with the sincerest of his intentions. “It is time for others to carry forward the mission of making Pakistan a truly democratic, prosperous and peaceful country that embodies the finest dreams our founding fathers had envisaged for us,” he added. “My tenure ends on 29th November 2013. On that day I will retire. May the Almighty Allah help and guide us all,” he said. – APP