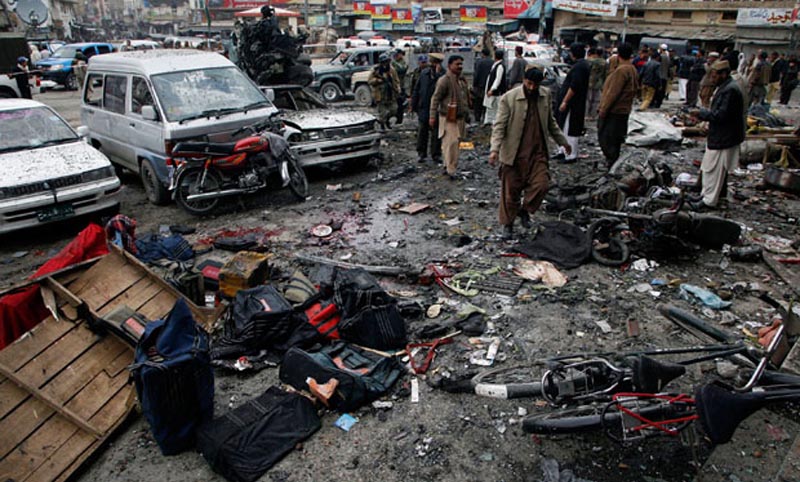 After Iraq and Afghanistan, Pakistan ranked third with 2345 fatalities in the global terrorism index (GTI) released Tuesday while 17,958 lives were lost globally due to terrorism in 2013.

Compiled and released by the Institute for Economics & Peace (IEP), the GTI ranks countries by the impact of terrorist activities as well as analyzing the economic and social dimensions associated with terrorism.  The index scores 162 countries, covering 99.6% of the world’s population, and examines trends from 2000 to 2013, the IEP said in a press release. Over 80% of the deaths from terrorist attacks in 2013 were in just five countries: Iraq, Afghanistan, Pakistan, Nigeria and Syria. Iraq continues to be the country most impacted by terrorism with 2,492 attacks killing 6,362 people, which represents a 164% increase from 2012. ISIL was responsible for most of the deaths in the country.

Terrorism has also grown significantly in intensity and breadth outside of these five countries. In 2013 there were 3,721 attacks recorded in the rest of the world killing 3,236 people, an increase of over 50 percent year-on-year. A total of 60 countries recorded deaths from terrorist attacks in 2013. Steve Killelea, Executive Chairman of IEP, said,  [contentblock id=2 img=gcb.png]  “Terrorism doesn’t arise on its own; by identifying the factors associated with it, policies can be implemented to improve the underlying environment that nurtures terrorism. The most significant actions that can be taken are to reduce state-sponsored violence such as extra-judicial killings, reduce group grievances and hostilities, and improve effective and community supported policing.” The IEP report also sources both high and low estimates of foreign fighters who are actively fighting in Syria, utilizing the best available data.

The low estimations for number of fighters from Europe are 396, with the high estimates at 1,846, while the low estimate for the MENA is 1,930 and the high estimate is 6,664. The two most successful strategies for ending terrorist groups since the late 1960s have been either policing or the initiation of a political process; 80 percent of organisations that ceased operations ended this way. Only 10 percent of terrorist organizations ended due to having achieved their goals while 7 percent were eliminated by full military engagement. The GTI also provides guidance for assessing the risk of the potential of future attacks in countries where there are currently low levels of activity. Based on measuring various political, violence and group relationship indicators, countries at risk of substantial increases in terrorism have been identified.

At least 13 countries are facing a greater risk of substantial terrorist activity: Angola, Bangladesh, Burundi, Central African Republic, Cote d’Ivoire, Ethiopia, Iran, Israel, Mali, Mexico, Myanmar, Sri Lanka and Uganda. Since 2000, around 7 percent of all terrorist incidents and 5 percent of all fatalities have occurred in OECD countries resulting in 4,861 deaths from 3,151 attacks.  OECD-based terrorism in 2013 was slightly down from 130 deaths and 333 incidents in 2012 to 113 deaths and 311 incidents in 2013. – Saama