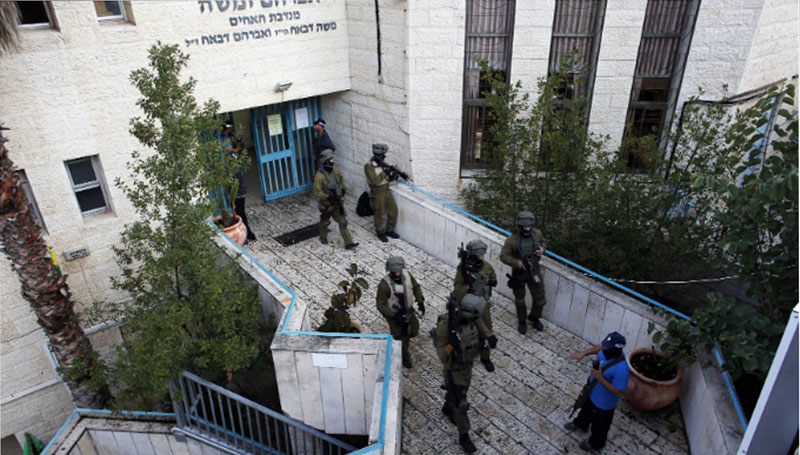 Police sources earlier told that five Israelis had been killed in the attack on Har Nof Synagogue on Tuesday morning. Media Stefanie Dekker also said that four other Israelis were injured in the attack. Police said the men entered the synagogue before being shot dead by police. Rosenfeld said it wasn’t immediately clear what weapons the suspects used to attack worshippers at the synagogue. Dekker said there were conflicting reports on what arms were used, with some saying the men were armed with knives and axes. Earlier reports said the attackers were armed with guns.

The area has been cordoned off by police, television footage showed. Israeli police said the attackers were from Israeli-occupied East Jerusalem. Hamas welcomed Tuesday’s attack, saying it was “a natural reaction to Israel’s practices” against Palestinians. The latest violence comes amid spiking tensions in Jerusalem. Late on Sunday, a Palestinian bus driver was found hanged in his vehicle. [contentblock id=2 img=gcb.png]    Israeli police said he killed himself, but many Palestinians believe he was killed by Jewish settlers. At least six Israelis were killed in a spate of attacks over the past few weeks. “Everyone expected this to happen. Jerusalem is boiling, Yesterday, the Israeli forces demolished the houses of the Palestinians who attacked Israelis but they never punish Israeli attackers,”

Ghazi Hamad, a senior Hamas official, told Media. “So this is a natural reaction. We are expecting more violence,” he said. “Hamas will support any military operation against Israeli occupation anywhere.” Jerusalem has also seen confrontations, that sometimes turned deadly, around the al-Aqsa Mosque in the eastern side of the city.

Palestinians are angery at what they say are repeated attempts by right-wing Jews to enter the Muslim-run compound housing the mosque. The compound is also considered by Jews to be a holy site. Palestinians also complain that Israli forces impose restrictions on Muslim worshippers trying to attend prayers in the mosque.