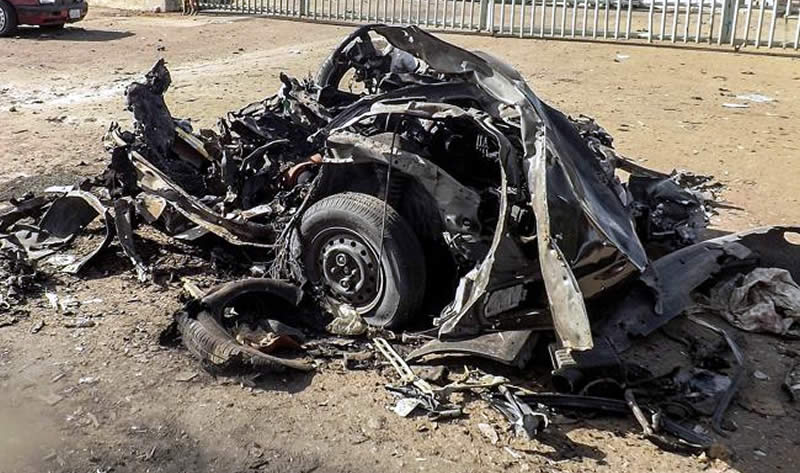 A girl bomber blew herself up and killed five others on Sunday in an attack on a market in the north-eastern Nigerian city of Potiskum, witnesses and a hospital source said.

Nineteen others who sustained injuries were taken to hospital after the blast in Yobe state’s commercial capital, a local vigilante leader said. “So far, five people have been killed with the girl while 19 others have been taken to hospital for injuries,” Buba Lawan said. A hospital source confirmed the toll. The attack occurred at around 1:30pm during peak hours of business. Witnesses said the girl appeared to be as young as seven years old and was the latest in a string of child suicide bombers in Nigeria. Previous such attacks have been blamed on Islamist extremist group Boko Haram.

The attack again highlighted the severe security challenges facing Nigeria in the run-up to March 28 presidential and parliamentary elections. President Goodluck Jonathan is in a tough re-election bid against ex-military ruler Muhammadu Buhari in the vote, initially scheduled for February 14. The military pushed for the six-week delay eventually granted by the electoral commission to give it time to secure the country even though the insurgency has raged for six years. Sunday’s incident was the second suicide attack around the same market, where new and second-hand phones are sold and repaired.

The first attack occurred on January 11, when two suicide bombers, one of them appearing to be around 15 years old, blew themselves up outside the market. The attack killed six and injured 37 others. In Sunday’s attack, suspicious security guards and vigilantes said they had sought to prevent the girl from entering the market. “We sent her back four times, because given her age, she did not have anything to do in the market,” Lawan said. “When we were screening people, she bent and tried to pass under the ropes, some distance from our view.

That was when the explosives went off.” In a sign of how much distrust has been generated over the suicide bombings, Lawan said that “since the January suicide bomb attacks, we have barred women from entering the market to prevent further attacks”. Borno, Yobe and Adamawa states, all located in north-eastern Nigeria, have witnessed dozens of attacks since Boko Haram intensified its campaign in the region in the past two years. Jonathan said in an interview published on Sunday that he underestimated the Islamists, who have overrun swathes of the northeast. Boko Haram has recently extended its bloody campaign to neighbouring countries across Nigeria’s north-eastern border as regional forces pursue them.