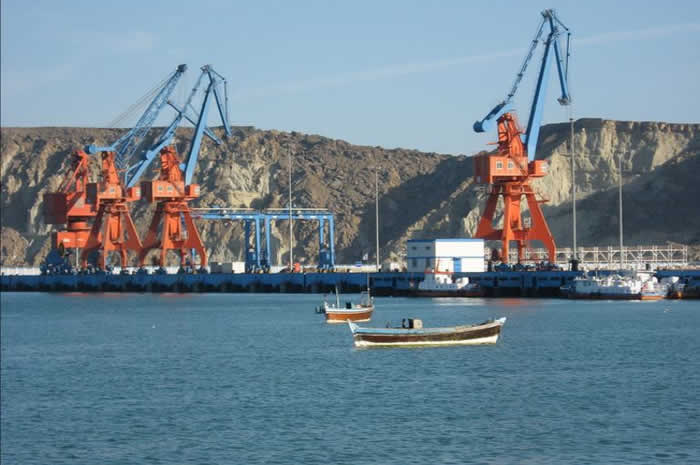 Pakistan handed hundreds of hectares of land over to China Wednesday for development of a special economic zone in the port of Gwadar, part of a $46 billion project giving Beijing greater access to the Middle East, Africa and Europe.

The government of Baluchistan province — Pakistan’s poorest — handed over about 280 hectares of a 923-hectare (2,300-acre) swathe of tax-exempt land that Beijing will develop under a 43-year lease.

The rest of the land will be handed over under the agreement with the public China Overseas Port Holding Company “soon”, senior Pakistani government officials told AFP. The development is part of the China-Pakistan Economic Corridor, an ambitious $46 billion investment plan linking western China to the Arabian Sea, part of Beijing’s ambition to expand its trade and transport footprint across Central and South Asia while countering US and Indian influence.

Experts say access to the port of Gwadar will cut thousands of kilometres off the distance which oil and gas imports from Africa and the Middle East have to travel to reach China. Pakistan’s planning minister Ahsan Iqbal and shipping minister Kamran Michael attended the handover ceremony Wednesday with Chinese development commission vice chairman Wang Xiaotao. As part of the wider plans, an international airport will also be built with a Chinese grant at Gwadar, with construction due to begin in January. Gwadar port, located 540 kilometres (335 miles) southwest of Karachi, was built in 2007 with technical help from Beijing as well as Chinese financial assistance of some $248 million.

It gives China “new access” to the Arabian Sea, Pakistani analyst Hasan Askari told AFP, adding that it shows to the rest of the world that “China is willing to help friends and spread its influence through positive economic and trade activities”. India has previously expressed concerns about the scheme. However, Mohan Guruswamy, head of the New Delhi-based think tank Centre for Policy Alternatives, defended the project Wednesday. “This is an economic project and India has no concern over Chinese cooperation,” he told AFP. “Concerns arise if there are defence related matters,” he said. Acquiring the land from private owners to build the economic zone took several years and cost the Baluch government around $62 million, officials have said.

Pakistan is also raising a special security force of between 10,000 and 25,000 men to protect the port. Desperately poor Baluchistan has been roiled since 2004 by a separatist insurgency aimed at seeking greater control over the province’s rich oil, gas and mineral resources. Some Baluch nationalists have accused the Chinese of conspiring with the Pakistani elite to plunder the province’s resources while doing little to share profits and create jobs for local people.