36 killed In Istanbul Airport Bombings As PM Blames IS 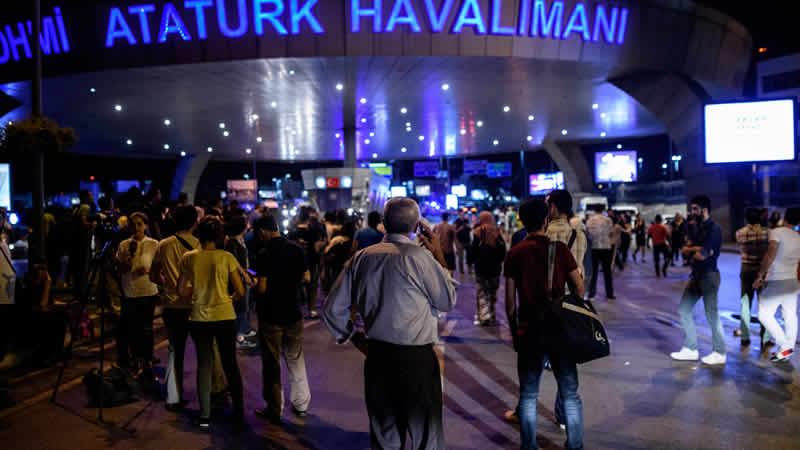 36 killed in Istanbul airport bombings as PM blames IS

A triple suicide bombing and gun attack at Istanbul’s Ataturk airport has killed at least 36 people, including foreigners, with Turkey’s prime minister saying early signs pointed to an assault by the Islamic State group.

The attackers began spraying bullets at the international terminal entrance before blowing themselves up at around 10:00 pm (1900 GMT) Tuesday, Turkish authorities said.

It is the deadliest of four attacks to rock Turkey’s biggest city this year, with two others blamed on IS and another claimed by a militant Kurdish group. A view of the entrance of the Ataturk international airport after two suicide bombers opened fire before blowing themselves up at the entrance, in Istanbul, Turkey June 28, 2016. Courtesy of 140journo/via Reuters. Though there was no immediate claim of responsibility for Tuesday’s carnage, “the evidence points to Daesh”, Prime Minister Binali Yildirim told journalists at the scene, using another name for the militants.

He said the dead included foreigners, but gave no further details. Justice Minister Bekir Bozdag put the number of wounded at 147. The attack prompted the suspension of all flights at the airport — one of Europe’s busiest hubs. Turkish President Recep Tayyip Erdogan called for an international “joint fight” against terror, as Western allies including the United States condemned the “heinous” attack. Yildirim said the suicide bombers had arrived in a taxi and opened fire on passengers with automatic rifles before blowing themselves up.

Officials walk inside Turkey s largest airport, Istanbul Ataturk, Turkey, following a blast June 28, 2016. Security camera footage widely circulated on social media appeared to capture two of the blasts. In one clip a huge ball of flame erupts at an entrance to the terminal building, scattering terrified passengers. Another video shows a black-clad attacker running inside the building before collapsing to the ground  apparently felled by a police bullet and blowing himself up. Tuesday’s attack follows coordinated IS suicide bombings at Brussels airport and a city metro station in March that left 32 people dead. An AFP photographer saw bodies covered with sheets at the terminal, which bore heavy damage from the blasts.

Bullet holes peppered the windows and shattered glass lay on the floor, while abandoned luggage was scattered everywhere. A weapon is seen on the floor at Ataturk airport after suicide bombers opened fire before blowing themselves up at the entrance, in Istanbul, Turkey June 28, 2016. Courtesy of 140journo/via Reuters Hundreds of police and firefighters including forensic officers were at the scene. Somebody came and shot at us and then my sister ran,” Otfah Mohamed Abdullah told AFP. I don’t know which way she ran and after that I fell down.

I was on the ground till he (the gunman) stopped… I can’t find my sister.” I was waiting for my flight to Tokyo and suddenly people started running and I followed them. I heard gun shots and everyone was panicking,” Japanese tourist Yumi Koyi told AFP. There was chaos at the nearest hospital in Istanbul’s Bakirkoy district, which was inundated with relatives desperate for news of loved ones. Yildirim visited the hospital to offer his condolences to the victims. Brussels airport, the scene of suicide bombings just months ago, tweeted condolences, saying:

Our thoughts are with the victims of the attacks at Istanbul airport. Security expert Abdullah Agar told CNN Turk the attack bore the hallmarks of the Islamic State group. People leave Turkey s largest airport, Istanbul Ataturk, Turkey, following a blast June 28, 2016. It really bears a resemblance to their methods,” he said in reference to the Brussels bombings, which were claimed by IS. The US and French consulates warned people to stay away from the area. Erdogan met with his prime minister and military chief after news of the carnage broke. We urge the world, especially Western countries, to take a firm stand against terrorism,” Erdogan said in a statement. Despite paying a heavy price, Turkey has the power, determination and capacity to continue the fight against terrorism until the end.”

Istanbul, a major tourism hub that is home to some 15 million people, has suffered a series of attacks in recent months, including a bombing in the heart of the tourist district that killed a dozen German visitors and was blamed on IS. Paramedics help casualties outside Turkey s largest airport, Istanbul Ataturk, Turkey, following a blast, June 28, 2016. Two months later, three Israelis and an Iranian were killed in a bomb attack on the city’s main Istiklal shopping street, also blamed on IS. A blast on the tarmac at Istanbul’s other international airport, Sabiha Gokcen, killed a cleaner in December. Turkey has been hit by at least five attacks blamed on IS militants, including a blast in Ankara in October 2015 that left over 100 dead, though the group has never formally claimed responsibility for an attack in Turkey. Ankara has meanwhile launched a sustained offensive against the outlawed rebel Kurdistan Workers’ Party (PKK) following the collapse of a ceasefire last year. Hundreds of members of the Turkish security forces have since been killed in PKK attacks.