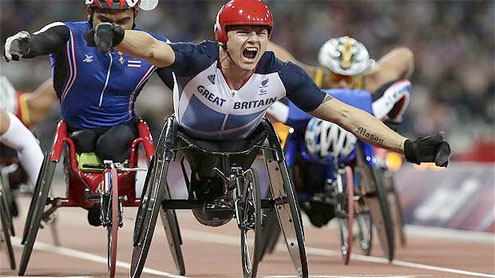 Two down, two to go. After racing to victory in the most consummate fashion to successfully defend the blue riband event of wheelchair racing, the Paralympic T54 1500m crown, David Weir addressed his new adoring fan club in the Olympic Stadium with the promise that is now gunning for a unique Grand Slam of golds.

“I’ll try my best,” he assured the cheering thousands from his racing chair and on this evidence his best will be too good for any of the rivals who appear to now be pursuing his fiery chariot with less and less conviction.Weir was so completely in command here in the event he says every wheelchair wants to win most, lifting his second title in three days, that it is hard to bet against him taking home that quartet of golden gongs.

He will have to win at distances as far removed as the 800m, the heats of which are this morning, and the marathon to complete the set. In wheelchair racing, this would probably feel like the equivalent of Emil Zatopek’s monumental triple gold at 5,000m, 10,000m and the marathon in Helsinki Olympics in 1952. Only with a bit more versatility thrown in.”It will be extraordinary,” said Weir. ‘Will’, note, not ‘would’.Weir promises no complacency but who on earth is going to stop him now? For just 48 hours after he had delivered arguably the performance of the championships by prevailing in an epic 5,000m final, the 33-year-old produced a powerhouse display here every bit as captivating.

Just as on Sunday night when Weir started capturing the imagination of Britain in the same way his mate Mo Farah did at the Olympics, 80,000 went mad watching Weir’s Popeye arms spin those wheels with manic ferocity yet again over the last lap to leave his pursuers feeling utterly deflated once more.Actually, the victory had a real feel of mighty Mo about it. The same tactical assurance, always in the right place at the right time as he followed the Chinese pacesetter Liu Yang and with too much pace to prevent his opponents ganging up to scupper him, Weir was the complete master of his fate.

And like Farah, when he hit the front from the bell, stretched out down the back straight and then pushed hard one last time with another surprising gear to maintain the daylight between him and his nearest pursuer, Thailand’s Paralympic record holder Prawat Wahoram, nobody but nobody was going to get past.The double champion from Beijing ensured he would become at least a double champion for 2012 too by roaring across the line in 3 min 12.09 sec, three metres clear of Wahoram (3:12.32) with Korean Kim Gyu Dae (3:12.57) taking the bronze. Weir’s old foe, world record holder Marcel Hug, was fourth, utterly eclipsed.

“No trouble at all,” Weir shrugged afterwards. “I felt so relaxed today I wasn’t bouncing off the walls ready to race so I’d saved a lot of energy. I just knew my speed is so good at the moment. Actually, I thought I went a little bit too early with a lap to go.”In fact it was perfect timing, just as his tactics had been spot on. “I knew they were going to come up on the outside of me and try to block me in. Me and Josh (Cassidy, the Canadian racer) blocked them in instead; it wasn’t planned but he helped me out a little.”

Once he had rolled across the line Weir roared his joy, punching his gloved hands to the Stratford sky, after again winning a contest which felt quite as captivating as anything the Olympics had delivered here.”This is the blue riband event, the one I always dreamed of winning. Every wheelchair racer does and I’ve done it twice now so it’s a great honour.”This was simply glorious sport and it is impossible not to feel awed by watching a man who was born with a spinal cord transection that left him without the use of his legs now performing here with such athletic brilliance.

Like so many Paralympians, Weir doesn’t want a fuss made but he deserves every OTT salute going and he cannot help smiling with a little bemusement about how he has captured Britain’s imagination. Good grief, he even has his own internet signature tune now – the Weir-Wolf of London!”I am aware of it (his new national celebrity), I do see it and it’s an amazing feeling,” he smiled.”My postbox has been painted in gold in Wallington (his home town in Surrey) this afternoon – and I’ve been told they’re going to do another one now too.”

He has received tweets of congratulations from both Bradley Wiggins and Usain Bolt, who have both hailed his brilliance.”I look up to Bradley so much, he’s a good guy,” said Weir, who was wearing a specially adapted British cycling team helmet.”And to get something from Usain Bolt too … amazing!”It was a particularly poignant night for Weir as his dad was over from Northern Ireland and among the 80,000 crowd. He rarely watches his lad compete live but Weir explained: “He used to take me training every day when I was younger. It was nice that he could be here.”

And, with any luck, there will be more to come yet from his boy. This morning Weir goes in the heats of the two-lap event with the final set for Thursday night and if he successfully defends that crown, he will then have his sights on triumphing in the marathon on Sunday.If Weir was to provide a glorious conclusion to the entire Games by winning on the streets of the capital, which he has done six times in the London Marathon, then that haul of four golds in one of the most competitive classifications would surely make him the athlete of the Games.How can you argue against it? All hail the Weir-Wolf of London. Scream it to the world … How-oooool! – Telegraph