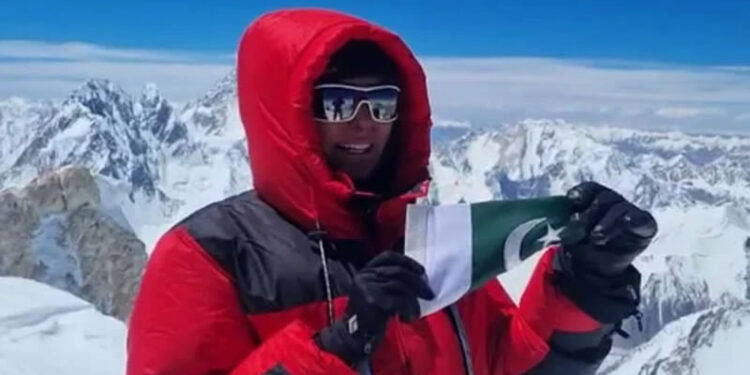 Many considered the activity to be limited to women from the mountains, especially those who live in the picturesque region of Gilgit Baltistan.

Fast forward to 2021, the country has seen enough numbers of female mountaineers and trekkers who want to climb every mountain and trek to the most difficult destinations.

Several Pakistanis remember Kiani as the bride who had her wedding shoot at the K2 base camp as her videos of the 2018 photoshoot went viral on social media.

But she’s more than just a bride on a base camp.

“I did the photoshoot there as I wanted to make my wedding memorable but I don’t consider that as an achievement. However, a lot of people messaged me after that to enquire about mountaineering and trekking to K2 basecamp, which was a good thing,” Naila told Geo News.

“On the same trip, I met several mountaineers and high altitude potters who motivated me to opt for mountaineering, so I gave it a try,” she shared, speaking about how her mountaineering career started.

To the surprise of many – her first attempt was 8,000m Gasherbrum and she managed to do it successfully. Many mountaineers, otherwise, start by conquering smaller peaks, but Naila did differently.

Before the summit, Naila did some research about mountaineering and found out that there were not too many women in the field. Even if there were any, they were from Gilgit valley.

“There were hardly any women from city areas,” she said.

“When I was learning about mountaineering, I got to know that there are not too many girls in this job and even if there were any – they were mostly from a family of mountaineers who live in GB. They had basic facilities and training as part of their upbringing, unlike us, who had to start from zero,” Naila explained.

“They’ve summitted 6,000m and 7,000m peaks as well, which is a good sign. I am also receiving messages from various girls who want to start mountaineering,” she said.

We are a land of mountains but we don’t have much infrastructure to promote mountaineering, we need support from the government so that local and foreign mountaineers are attracted towards ranges in Pakistan, she said, adding that it will also help our country’s economy.

Naila insisted on improving infrastructure as well so that more and more people can be encouraged to opt for mountaineering.

Islamabad-based Uzma Yousaf in 2017 made history to become the first Pakistani woman to scale the 7,027-metre high Spantik peak in Gilgit-Baltistan. She was 43 then.

Her Spantik expedition was followed by an attempt to scale a broad peak.

Uzma’s journey started when she first trekked to Fairy Meadows in 2014, she insisted on trekking despite family suggesting to use horses, but she had to prove herself. And, she did.

Uzma feels that mountaineering is challenging for women who are not used to the mountains’ climate and those who are more addicted to a luxurious life. However, if you’re passionate, nothing can stop you.

“Those who are born in mountain areas, grow up with training to climb mountains, they’ve got the strength naturally and acclimatise with the conditions there. Those who are not from mountainous areas, like us who live in city areas, find it challenging because we are not used to these practices,” she said.