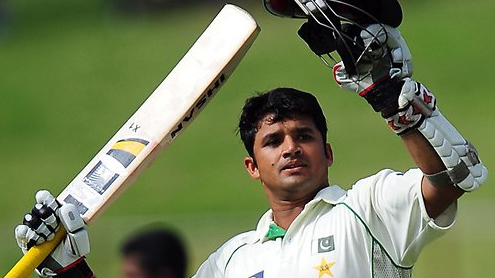 PALLEKELE – Pakistan’s Azhar Ali smashed a second century in successive matches Wednesday to leave the final Test against Sri Lanka poised for an intriguing finish. Azhar made 136 as Pakistan wriggled out of a corner to post 299-8 in their second innings by stumps on the fourth day in Pallekele, a lead of 188 runs with two wickets in hand.

The tourists now have three sessions on the fifth day to conjure a series-levelling win on a wearing pitch that will offer some turn to prolific off-spinner Saeed Ajmal. But Sri Lanka remain favourites to win or draw the match and clinch their first series victory in three years since beating New Zealand at home in 2009. The hosts won the first Test in Galle by 209 runs before the second in Colombo was drawn. Azhar, who made 157 in the Colombo Test, held the innings together for six hours, hitting 13 boundaries in his fourth Test century and the third this year. The 27-year-old put on 94 for the second wicket with his overnight partner Mohammad Hafeez and 48 for the third with Younis Khan after Pakistan resumed the day at 27-1.

But the most crucial partnership came towards the end of the day when Asad Shafiq helped Azhar add 100 for the fifth wicket after Younis and skipper Misbah-ul Haq had departed quickly. Fast bowler Dilhara Fernando and left-arm spinner Rangana Herath sparked a lower order collapse in the final hour as Pakistan slipped from a comfortable 276-4 to 299-8. Fernando had Azhar caught behind and then claimed his 100th Test wicket by trapping Mohammad Sami leg-before. Herath claimed Umar Gul and Saeed Ajmal leg-before, but Shafiq saw out the day for Pakistan in the company of injured wicket-keeper Adnan Akmal. Shafiq was unbeaten on 55 after top-scoring with 75 in the first innings, while Akmal, batting with a hairline fracture in his left hand, had yet to score.

Hafeez, who also hit a century in Colombo, made 52 when he was dismissed just before lunch with Pakistan two runs away from wiping out the first innings deficit of 111 runs. The Pakistan vice-captain edged a wild drive off Fernando to Tharanga Paranavitana in the slips. The wicket of Hafeez came against the run of play after Sri Lanka’s bowlers failed to contain the flow of runs on a pitch that appeared to ease out under bright sunshine. Pakistan went to lunch at 119-2, in front by eight runs, after Younis had given his team the lead by tapping Angelo Mathews for a single to point. Wicket-keeper Prasanna Jayawardene dropped a low catch when Younis, then on 12, followed a wide ball from Angelo Mathews. But the missed chance did not prove costly as Younis managed to add just seven more runs when he was snapped up by a lunging Paranavitana at silly-point off Herath.  -Pakistantoday