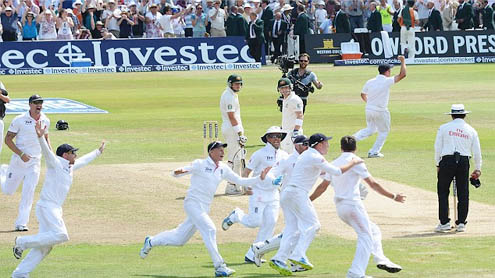 This may have been one of the great, most dramatic and controversy-filled Test matches of all time, but it was also a very modern one.

To England’s everlasting relief, the operators of the infra-red technology did not ‘mess up’ this time when Brad Haddin, who had taken Australia so, so close to one of the great upsets, edged Jimmy Anderson into Matt Prior’s gloves.There was no error from TV umpire Marais Erasmus either, just confirmation to Aleem Dar that a Test that officialdom will want to forget had seen another mistake from a man in a white coat. Cue English ecstasy and Aussie heartbreak.This first Ashes Test should be remembered for masterful performances from Anderson, Ian Bell and the incredible Ashton Agar, but it will also go down as another dominated by the vagaries of the  decision-review system.

There were those who wanted to compare this nailbiting 14-run England victory with the greatest of all Tests at Edgbaston in 2005 but, in truth, it did not quite live up to that classic because of the constant intervention at Trent Bridge of technology, usually accompanied by controversy.But let us celebrate a remarkable match that, against all odds, came to the most thrilling of conclusions with Australia in sight of the winning post. When Haddin and James Pattinson (right) came together, 80 more runs were needed by Australia’s last pair and England seemed home and dry but there was to be one more late, barely believable twist in a Test full of them.

Anderson, the man who has taken more Test wickets in Nottingham than anyone, had almost bowled himself into the ground in a last-morning unbroken spell of 13 overs that saw him take three of the last four wickets to fall.How England needed him, because, at times, it seemed as if Anderson, the sheriff of Nottingham himself, was taking on Australia almost single-handed. Stuart Broad looked to be feeling his shoulder injury, Graeme Swann was not at his best and Steven Finn was so poor that his second Test place must now be in jeopardy. It could lead to a call-up for Chris Tremlett, who may be in the squad that England announce this morning.

It was when Anderson, cramping up from all the effort, eventually had to take a rest that Australia’s hopes began to rise. Finn came and went for 24 runs in two overs, including four byes, while Swann could not quite get the sharp turn that seemed assured on such a worn surface on the last day.When England missed two chances to win the match, one of their best fielders in Jonny Bairstow missing a chance to run out Haddin and Finn then shelling a chance on the boundary he had done well to reach, it really did look like fortune was favouring the brave batsmen of Australia.

Haddin and Pattinson, almost as miscast at No 11 as Agar, had whittled away 60 of those 80 required runs with composed, sensible batting when one of cricket’s enduring traditions, as opposed to the very modern one of technology, leant England a hand. It was time for a spot of lunch.

It may have seemed ludicrous for anyone not versed in cricket to see everyone trooping off just as the game was reaching a thrilling finale but it gave England, and Anderson in particular, a precious respite to regroup. Fluids were taken on, legs were rested, and Anderson was thrown back into the fray.Just in time, too. The target had come down to 15 when England kept Haddin frustrated at Anderson’s end with two brilliant pieces of fielding from Bell and Bairstow. Then came the biggest of moments.

Haddin edged Anderson, Prior took the catch but nobody seemed quite sure if there had been bat on ball. Anderson heard nothing and nor, more pertinently, did poor old Dar, who looked shell-shocked by the end of five testing and traumatic days for the umpires. Not out, was the call.

Yet England still had two reviews up their sleeves, having used them far more wisely than Australia. Cook, who insisted that he had heard the edge, called for Erasmus, who so infuriated England earlier in the match, to save their day and, quite possibly, their series.The edge was clear on Hot Spot — thankfully available from side on — a noise was clear on the audio, Anderson had his 10th wicket of the Test for a second time at Trent Bridge and Haddin, such a fierce competitor, was palpably out.

It is difficult not to feel sympathy for Australia. How they fought over these five days, how they made England work for a win that looked assured when they had the enemy 117 for nine in their first innings and 231 for nine in the second.The most extraordinary fact from a quite magnificent match was that Australia’s last wicket added 228 across both innings, first through Agar and Phil Hughes and then, almost decisively, through Haddin and Pattinson.Yet coming so close may also have a negative effect now because it is difficult to see how Australia can lift themselves when, ridiculously, there are only three days between the end of this Test and the start at Lord’s on Thursday.

England were not at their best for much of this match, and their habit of making slow starts to series almost haunted them again but there is a sense that they have got away with one here and should be much stronger at Lord’s.As, too, must the DRS. It cannot be right that a system brought in to eradicate howlers should be involved in countless marginal decisions but was not available, admittedly through Australia’s waste of reviews, when it was most needed here.The failure of Dar to see the clearest of edges from Stuart Broad, and his failure to walk, will be another defining moment from this game.Better for now to relish the sporting drama that was played out on this magnificent arena in front of another full house.England have their noses in front but Australia have shown they will be much stronger than many of us expected. One Test down, nine to go, and game very much on. – DailyMail