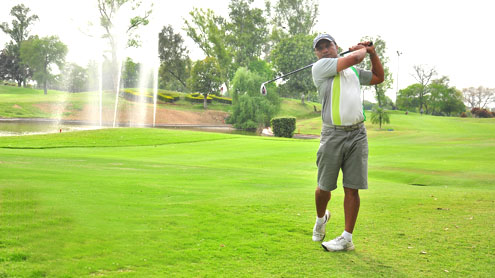 At the conclusion of the first round of this three rounds,significant 5th Acquafina Royal Palm National Golf Event at the character loaded par 72 Royal Palm Golf Course,the Islamabad ‘A’ team comprising Taimur Hassan,Tariq Mehmood,and Umair Salim showed their aggressive intent by managing to get a hold on the frontrunners position with an impressive team score of 229 made possible with some authoritative play by Taimur Hassan(gross 73),some ardent play by Tariq Mehmood(gross 75) and a modest contribution of 81 by Umair Saleem.Another team that looks extremely good is the Royal Palm ‘A’ team who aggregated a team score of 231,made possible by a decent 75 gross from Muhammed Rehman,a gross 77 by Omer Salamt and Shaoaib Bokharis 79.Bunched together with Royal Palm team at the score 231 is Gujranwala Club team,who surprised all with a tremendous show of accurate hitting and perfect play on the greens thereby giving the impression that the city of wrestlers has turned into a city of golfers.For Gujranwala, while Saleem Raza and Raheel Ikram produced rounds of excellence,they were let down by their team mate Waqas Khan who got carried away by the pressure of the big occasion,resulting in poor shot making and an a equally poor contribution of gross 85.

It was his shoddy effort that pulled Gujranwala down to a slightly less noteworthy position.Other teams in order of merit are Gymkhana ‘A” at an aggregate score of 232,Royal Palm’B” at 236 and Gymkhana ‘B’ at 240.Other teams are too far behind to deserve a mention.Alongwith the team event is the competition for individual gross and in this section Nadeem Abbas a two handicapper from Sargodah showed immense promise and played inspired golf for a par round of 72, to become listed as the leader in gross section and,in particular his birdies on holes 3,9 and 17,reflected streaks of brilliance.”I know”,he said,”the key to join the winners circle is to stay focused and concentrate on every shot and look forward to more excellence in the remaining two rounds”.One stroke behind Nadeem are three contenders,Taimur Hassan(Islamabad),Raheel Ikram(Gujranwala) and Saleem Raza,also from Gujranwala.The most experienced one out of these three is Taimur Hassan who inspite of his seniors age bracket looks in great trim and showed flashes of his old form with a round that had three birdies,eleven pars and four bogies.As for Raheel,he is a teenager who played with remarkable composure for a gross 73 and had putts been kind to him the excellence would have been far more.

A special word of praise for the efforts of Saleem Raza,who seems to have recovered partially from his multiple fractures of hip joint and knee and continues to be passionate about golf.His round of 73 is a reflection of his title aspirations and said,”my club mates at the Gujranwala Golf Club are hoping I will excell more over the next two rounds and I do not intend to disappoint them.Others in line for honors in gross section are Mukammed Rehman(Royal Palm) at gross 75,Sameer Iftikhar(Gym) 75,Tariq Mehmood(Isd) 75 and Sohail Rana(Royal Palm) also 75.Sohail Rana is another one who is above 60 years of age,yet regularly contest tournaments and successfully manages to embarras his younger opponents with his performance.The glee was apparent on his face when he finished his round yesterday.In the challenge shield net event which is due to conclude after two rounds today,the best one after the first 18 holes is Omer Arshed(Multan) with a net score of 66 followed by Saleem Raza at net 67,Ahmed Sarwar net 68,M.Leghari net 68 and Raheel Ikram net 69.The battle for honors in team championship is very much fierce and the leading teams will put pressure on each other to stay as front runners.