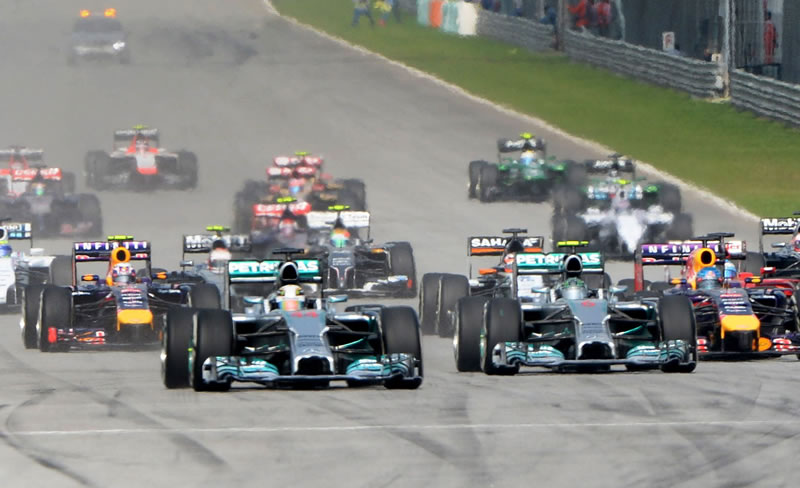 There are many uncertainties heading into this weekend s Malaysian Grand Prix, but the identity of the winning car is not one of them.

So pronounced was Mercedes  dominance through 2014 and in the Formula One season opener in Australia earlier this month, that it is hard to imagine anything other than another race victory for the Silver Arrows at Sepang on Sunday, and probably a one-two finish. Still, there are many other questions to be answered in Malaysia: will Lewis Hamilton sign a new Mercedes contract before the race?; will Fernando Alonso be passed fit to drive his first race back at McLaren?; has Valtteri Bottas overcome the back injury that ruled him out of Melbourne?; will Ferrari s Sebastian Vettel call Mercedes  bluff and turn up for that team s Friday engineers briefing?; and is this the last ever Malaysian Grand Prix? The fight over the race win looms as another showdown between Mercedes teammates Hamilton and Nico Rosberg. Since their collision at last year s Belgian Grand Prix, the Mercedes team has won every race, but worryingly for Rosberg, seven of the eight victories have been by the Briton. Hamilton is out of contract at year s end but the negotiations over a new deal are reaching a conclusion, and he may even have a fresh contract by the time he hits the track at Sepang.

“It is going back between the lawyers so hopefully it is done before the weekend,” Hamilton said on Sky Sports. “That would be great, but if not, in due time.” Alonso arrives in Malaysia having skipped the Australian race as a precaution due to the lingering effects of an accident in preseason testing. Alonso passed some initial tests in England last weekend, but faces further examination on Thursday by doctors appointed by the FIA and local race organizers. Given how far off the pace McLaren was in Australia as returning engine supplier Honda gets up to speed with the complex hybrid-energy power trains, the most interest in Alonso will not be how he performs on the track, but any revelations about his medical condition and the nature of the preseason crash, which remains the subject of an ongoing FIA investigation.

Bottas too will have to pass a fitness test on Thursday. The Williams driver suffered a torn disc in his lower back during qualifying in Melbourne and had to sit out the race. The Finn has been recovering and holidaying in Indonesia and Malaysia since leaving Australia and has expressed confidence he is ready to race. This year s race is the last on the current contract for the Malaysian Grand Prix, and the likelihood of a return in 2016 seems in the balance judging by the comments of Sepang chairman Mokhzani Mahathir “We want a win-win situation,” he was quoted to say by the local Bernama news agency. “There are several issues which I m still not very satisfied (with) and if we can discuss this further, we will renew the contract for another three years.”

Aside from the serious questions to be answered, the fun will be in seeing whether Vettel visits the Mercedes post-practice briefing on Friday. He was jokingly invited by Rosberg during the post-race media conference in Melbourne when theMercedes driver said he wanted a close fight for the championship, and the new Ferrari driver said he d take up the offer. Rosberg stood by the invitation in Mercedes  pre-race press release, saying he was “particularly looking forward to welcoming our special guest Mr. Vettel to the Friday engineering meeting. I m sure we will all learn a few interesting things for the weekend.”