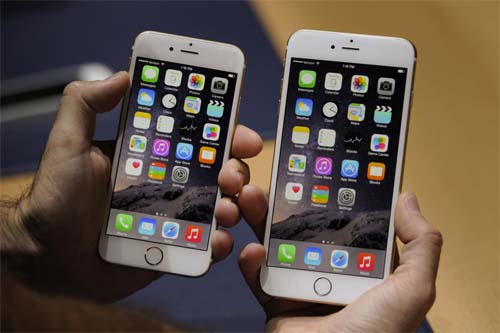 The company on Monday projected stronger-than-expected revenue of $63.5 billion to $66.5 billion in the December quarter, when new iPads and iPhones vie with rival devices from Microsoft Corp and Amazon.com Inc for consumers’ holiday outlays.

Shares of Apple rose 1.3 percent to about $101.10 in after-hours trade. But sales of the iPad, which helped launch the mainstream tablet market in 2010, slid for the third straight quarter. A gradual decline in tablet demand worldwide has worried investors already concerned with Apple’s slowing growth, who are awaiting a new device that can energize its expansion. Sales of Apple’s tablet slid more than 7 percent from the previous quarter to 12.3 million units, and were down 13 percent from the year-ago period. Some investors hope that Apple’s recently forged alliance with International Business Machines Corp, intended to drive tablet and phone sales to corporate customers, may help reverse a decline in sales of the tablet device.

Chief Financial Officer Luca Maestri said in an interview that the pair of tech giants had already signed on 50 “foundational” or initial clients, and the two intend to introduce their first jointly designed software apps next month. The level of interest from the corporate world has been incredible,” Maestri said.

Apple’s fortunes, however, still largely hinge on the iPhone, which accounts for half its business, and the company’s ability to again re-define markets with new technology gadgets. The Apple Watch, the company’s entry in the nascent wearables category, will not hit store shelves till 2015. Orders for the iPhone 6 and 6 Plus began in September, helping Apple chalk up a 12.2 percent jump in revenue last quarter to $42.12 billion. That exceeded the roughly $39.9 billion that Wall Street analysts had predicted, on average.

The new iPhone, which comes in larger sizes and a heftier price tag, marks Apple’s best product launch on record. That helped push overall smartphone sales to 39.27 million in the September quarter, beating the roughly 38 million some on Wall Street had anticipated.

Maestri said in an interview that the new iPhones, which went on sale just last week in China, had already surpassed the previous-generation model in terms of volume. The company also posted the strongest percentage growth in Mac sales, of 21 percent to 5.5 million units, since the December quarter of 2011.  REUTERS