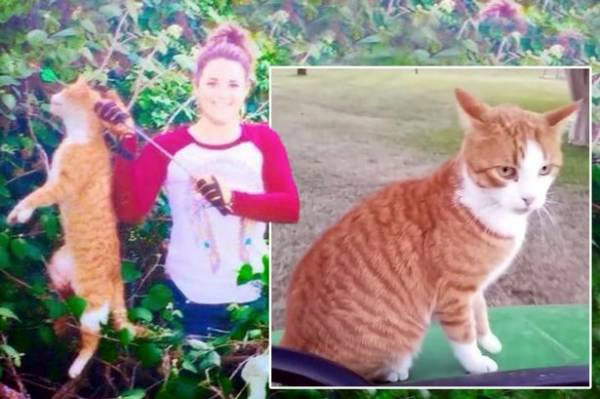 A Texas veterinarian who apparently shot a domestic cat through the head with a bow and arrow before posing with the dead animal on Facebook was sacked Friday as police launched an investigation into the slaying.

Kristen Lindsey triggered an avalanche of complaints and several online death threats after posting a picture of herself smiling with the assassinated ginger and white adult male late on Wednesday. My first bow kill, lol. The only good feral tomcat is one with an arrow through it’s head! Vet of the year award … Gladly accepted,” read a caption accompanying the post, which was later deleted and Lindsey’s Facebook account was taken offline amid the outcry. Local media said the cat belonged to an elderly couple who had reported it missing. Lindsey’s employer, the Washington Animal Clinic, confirmed the vet had been sacked. “We are absolutely appalled, shocked, upset, and disgusted by the conduct,” the clinic said in a statement. “We have parted ways with Ms Lindsey. We do not allow such conduct and we condemn it in the strongest possible manner.

“Please know that when informed of this we responded swiftly and appropriately and please do not impute this awful conduct to the Washington Animal Clinic or any of its personnel.” The Austin County Sheriff’s department said it was investigating and appealed for outraged members of the public to “take it easy” on deluged switchboard operators. A lot of concerned individuals are calling our dispatch for information,” a statement said.

“As we are trying to conduct normal operations of dispatching Police, Fire and EMS, our dispatchers are being snowed under answering calls about our investigation… please take it easy on our dispatchers.” Austin County Sheriff Jack Brandes was quoted by the local KBTX-TV broadcaster as saying that he was disturbed by the photo.

“This kind of stuff shouldn’t happen in our society,” Brandes said. “It’s a very sad thing. Hopefully we will get to the bottom of it and get the truth, 100 percent truth, and get it to the DA (district attorney) and put it in his hands if it needs to go any further.” A local cat rescue group meanwhile announced it had offered a $7,500 reward for evidence leading to an arrest and conviction in connection with the heartless killing. “Animal cruelty must be taken seriously and the guilty parties should be punished to the fullest extent of the law,” said Becky Robinson, president and founder of Alley Cat Allies. (AFP)

Germany Still Has Some Way to Go to 'Smart Factories'