by top3
in Colleges and Universities
0 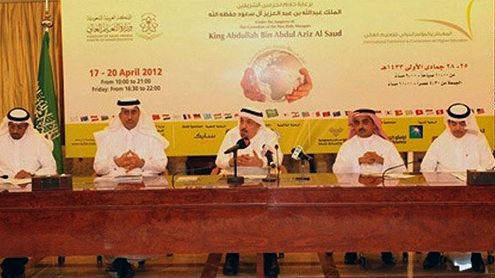 This is in addition to 55 Saudi universities and other institutions in the Kingdom, he added.

The high profile event is being organized by the Ministry of Higher Education under the support of Custodian of the Two Holy Mosques King Abdullah.

According to the organizer, this year’s conference will be one of the top events, with an expected 300,000 visitors attending. There are also 440 exhibitors from around the world participating in the event.

Al-Anqari, speaking at a press conference in Riyadh before the start of the event, said participants included a number of higher education institutions tied to Saudi universities and higher education institutions, as well as organizations concerned with rating and accrediting academic and e-learning courses, and distance learning and research centers.

He said the ministry organized this exhibition to achieve several objectives that would provide a true picture of the renaissance taking place in Saudi Arabia under King Abdullah and Crown Prince Naif.

It provides opportunities to identify the leaders and officials in the most prominent universities in the world and the progress Saudi universities have made in comparison to those in the rest of the world, he added.

The conference opens up new scope for partnerships between Saudi universities and their international counterparts. Al-Anqari explained how the ministry has attracted the cooperation of top universities. He also said there would be other significant benefits to the event, such as the exchange of experiences among participants both in the scientific and practical fields of the higher education sector and strengthening the links between them.

The exhibition at the conference provides an opportunity for students and their parents in finding out the options available for pursuing higher education in Saudi universities and abroad.

He pointed out the participation of an enormous number of foreign and local universities is a rare opportunity for university officials to meet others.

The minister expressed his gratitude to King Abdullah and Prince Naif for their unwavering support for the higher education sector and its institutions as well as relevant events such as the conference.

A number of distinguished speakers from major educational institutions all over the world will address the event and share their countries’ experiences to raise awareness of their respective educational systems and procedures. This will help establish positive communications channels with educational authorities in the Kingdom, encouraging them to upgrade their academic and professional capabilities.