by ToP
in Colleges and Universities, Featured
0 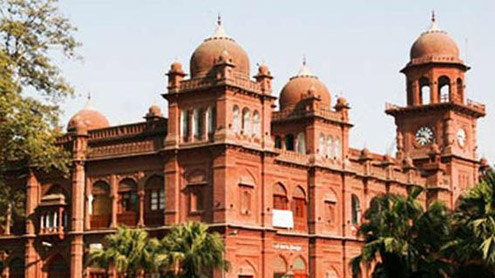 Lahore, University of the Punjab, Examinations Department has announced various exams’ results. The details of result can be seen at the official website of PU.

Among the 25 well known scientist and researchers of international fame, Dr Qounain will also participate in the conference.  The tour will begin from January 18, 2014 to January 25, 2014 in Germany and will provide the outline of innovative computer science research at German Universities and non-university research institutions in the area of artificial intelligence and visual/multimodal work out. PU Vice Chancellor Prof Dr Mujahid Kamran admired him on his triumph.

The University of the Punjab was established in 1882 which is the largest and the oldest seat of higher learning in Pakistan. This was the first university established in the sub-continent in Muslim majority area. Two eminent laureates are from this University showed great significance for its academic and research excellence.

The university has a great importance for higher education and are playing its worth role in this regard. The University struggles to provide amusing environment to get excellence in its academic activities. The varsity provides pleasant environment and low tuition fees which remains the institution of first choice for to get admission in the varsity. ilmkidunya

Apology Panacea to All Problems

Apology Panacea to All Problems