by ToP
in Featured, Funny News
0 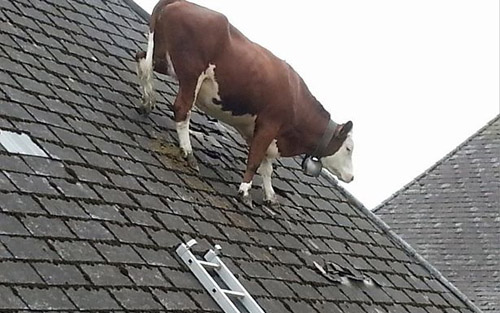 The cow was described by her owner as a “cantankerous beast” and damaged several slate tiles. The steaks were high for this cow after she became stuck on a farmhouse ROOF. Not content with life on the ground, the animal headed onwards and upwards – and ended up perched atop this building in Bern, Switzerland.

Looking like she might be about to graze on the slates, she balances on the slippery roof seemingly without a care in the world. The same could not be said for passers-by whose journeys ground to a predictable halt at the unnatural sight. Stunned cyclist Rolf Steiner said: “I couldn’t believe my eyes and had to look three times to make sure I was seeing what I thought I was seeing.

It’s believed the animal had been walking on a road behind the house when it decided there may be pastures new on the other side of the building. Instead of going round, the cow then decided to clamber over the house. Having milked her moment for all it was worth, the cow then made her way back to the field. Owner Dieter Mueller explained that she always was an awkward cow. “She always was one of my most cantankerous beasts, always wanting to do it her way, not mine,” he said. “She would have stayed up there for eternity if she had wanted to. I tried to coax her off when I first saw her, but she wouldn’t budge. “She had to do things in her own sweet time. “And I am left with the bill for replacing the tiles she smashed.”