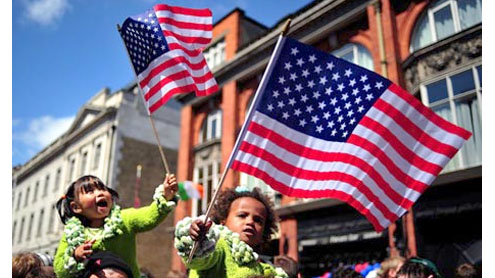 WASHINGTON: For the first time, racial and ethnic minorities make up more than half the children born in the U.S., capping decades of heady immigration growth that is now slowing.

New 2011 census estimates highlight sweeping changes in the nation’s racial makeup and the prolonged impact of a weak economy, which is now resulting in fewer Hispanics entering the U.S.”This is an important landmark,” said Roderick Harrison, a former chief of racial statistics at the Census Bureau who is now a sociologist at Howard University. “This generation is growing up much more accustomed to diversity than its elders.”The report comes as the Supreme Court prepares to rule on the legality of Arizona’s strict immigration law, with many states weighing similar get-tough measures.

“We remain in a dangerous period where those appealing to anti-immigration elements are fueling a divisiveness and hostility that might take decades to overcome,” Harrison said.As a whole, the nation’s minority population continues to rise, following a higher-than-expected Hispanic count in the 2010 census. Minorities increased 1.9 percent to 114.1 million, or 36.6 percent of the total U.S. population, lifted by prior waves of immigration that brought in young families and boosted the number of Hispanic women in their prime childbearing years.

But a recent slowdown in the growth of the Hispanic and Asian populations is shifting notions on when the tipping point in U.S. diversity will come — the time when non-Hispanic whites become a minority. After 2010 census results suggested a crossover as early as 2040, demographers now believe the pivotal moment may be pushed back several years when new projections are released in December.The annual growth rates for Hispanics and Asians fell sharply last year to just over 2 percent, roughly half the rates in 2000 and the lowest in more than a decade. The black growth rate stayed flat at 1 percent.

The immigrants staying put in the U.S. for now include Narcisa Marcelino, 34, a single mother who lives with her two daughters, ages 10 and 5, in Martinsburg, W.Va. After crossing into the U.S. from Mexico in 2000, she followed her brother to the eastern part of the state just outside the Baltimore-Washington region. The Martinsburg area is known for hiring hundreds of migrants annually to work in fruit orchards. Its Hispanic growth climbed from 14 percent to 18 percent between 2000 and 2005 before shrinking last year to 3.3 percent, still above the national average.arcelino says she sells food from her home to make ends meet for her family and continues to hope that one day she will get a hearing with immigration officials to stay legally in the U.S. She aspires to open a restaurant and is learning English at a community college so she can help other Spanish-language speakers.

If she is eventually deported, “it wouldn’t be that tragic,” Marcelino said. “But because the children have been born here, this is their country. And there are more opportunities for them here.”Of the 30 large metropolitan areas showing the fastest Hispanic growth in the previous decade, all showed slower growth in 2011 than in the peak Hispanic growth years of 2005-2006, when the construction boom attracted new migrants to low-wage work. They include Lakeland, Fla.; Charlotte, N.C.; Atlanta; Provo, Utah; Las Vegas; and Phoenix. All but two — Fort Myers, Fla., and Dallas-Fort Worth — also grew more slowly last year than in 2010, hurt by the jobs slump.

Pointing to a longer-term decline in immigration, demographers believe the Hispanic population boom may have peaked.”The Latino population is very young, which means they will continue to have a lot of births relative to the general population,” said Mark Mather, associate vice president of the Population Reference Bureau. “But we’re seeing a slowdown that is likely the result of multiple factors: declining Latina birth rates combined with lower immigration levels. If both of these trends continue, they will lead to big changes down the road.”William H. Frey, a demographer at the Brookings Institution who analyzed the census data, noted that government debates over immigration enforcement may now be less pressing, given slowing growth.

“The current congressional and Supreme Court interest in reducing immigration — and the concerns especially about low-skilled and undocumented Hispanic immigration — represent issues that could well be behind us,” he said.Minorities made up roughly 2.02 million, or 50.4 percent of U.S. births in the 12-month period ending July 2011. That compares with 37 percent in 1990.In all, 348 of the nation’s 3,143 counties, or 1 in 9, have minority populations across all age groups that total more than 50 percent. In a sign of future U.S. race and ethnic change, the number of counties reaching the tipping point increases to more than 690, or nearly 1 in 4, when looking only at the under age 5 population.

The counties in transition include Maricopa (Phoenix), Ariz.; King (Seattle), Wash.; Travis (Austin), Texas; and Palm Beach, Fla., where recent Hispanic births are driving the increased diversity among children. Also high on the list are suburban counties such as Fairfax, Va., just outside the nation’s capital, and Westchester, N.Y., near New York City, where more open spaces are a draw for young families who are increasingly minority.According to the latest data, the percentage growth of Hispanics slowed from 4.2 percent in 2001 to 2.5 percent last year. Their population growth would have been even lower if it weren’t for their relatively high fertility rates — seven births for every death. The median age of U.S. Hispanics is 27.6 years.

Births actually have been declining for both whites and minorities as many women postponed having children during the economic slump. But the drop since 2008 has been larger for whites, who have a median age of 42. The number of white births fell by 11.4 percent, compared with 3.2 percent for minorities, according to Kenneth Johnson, a sociologist at the University of New Hampshire.Asian population increases also slowed, from 4.5 percent in 2001 to about 2.2 percent. Hispanics and Asians still are the two fastest-growing minority groups, making up about 16.7 percent and 4.8 percent of the U.S. population, respectively.

Blacks, who comprise about 12.3 percent of the population, have increased at a rate of about 1 percent each year. Whites have increased very little in recent years.—The migration of black Americans back to the South is slowing. New destinations in the South, including Atlanta, Charlotte, N.C., Raleigh, N.C., and Orlando, Fla., saw sharp drop-offs in black population growth as the prolonged housing bust kept African-Americans locked in place in traditional big cities. Metro areas including New York, Chicago, Los Angeles and San Francisco had reduced declines or gains.

—Nine U.S. counties in five states saw their minority populations across all age groups surpass 50 percent last year. They were Sutter and Yolo in California; Quitman in Georgia; Cumberland in New Jersey; Colfax in New Mexico; and Lynn, Mitchell, Schleicher and Swisher in Texas.—Maverick County, Texas, had the largest share of minorities at 96.8 percent, followed by Webb County, Texas, and Wade Hampton, Alaska, both at 96 percent.—Four states — Hawaii, California, New Mexico and Texas — as well as the District of Columbia have minority populations that exceed 50 percent.The census estimates used local records of births and deaths, tax records of people moving within the U.S., and census statistics on immigrants. The figures for “white” refer to those whites who are not of Hispanic ethnicity. – Yahoonews