British parliament could shut for 5 years 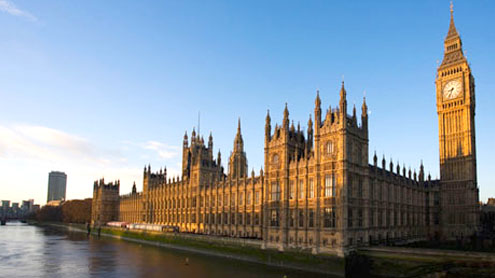 British parliament could shut for 5 years

LONDON: Having withstood revolutions, world wars and religious strife, the British Houses of Parliament are set to close down for the first time in its illustrious history for repairs, renovation and refurbishment.

The historic buildings which are witness to monumental events and debates could be closed for up to five years under plans of a three billion pound refurbishment plan.The House of Commons and House of Lords would be evacuated for the first time since the Second World War as the Grade I-listed building is overhauled after decades of delay.

Under one option, members of parliament would meet in a replica chamber under Big Ben while the antiquated plumbing and electrics, and the asbestos-riddled interior of the Westminster Palace are replaced. The House of Commons commission, chaired by Speaker John Bercow, has asked a group of MPs, peers and officials to report on options to save the building.Other options under scrutiny include leaving the Westminster Palace for good, selling it off and building a new parliament, or continuing with decades of limited repairs during the summer holidays. Supporters of the temporary evacuation plan believe it could save the taxpayers billions.

“The Victorian facilities are creaking and at the moment we are just trying to hold the palace together,” a House of Commons source told Daily Times.“We either move out or spend £10 billion over 20 to 30 years on trying to do the work during the summer recesses. We need to shut the building, let the builders in, pull the innards out and gut it.”The cost of the works, which could begin in 2015, is likely to prove sensitive. The proposals could also be resisted by MPs, who would be confined to temporary accommodation without access to many of parliament’s bars, cafes and restaurants. Hundreds of parliamentary staff would be housed in nearby buildings.

Parliament and the Treasury would have to approve the plans, which will go first to Bercow’s Committee and its counterpart in the Lords. The go-ahead could be given as early as next year. Although parliament’s exterior stonework has been repaired in recent years, the interior has not been fully refurbished since the 1940s. Commons sources said as they examined the scale of work required, “it became obvious we should move out”.

Another source said, “Moving out saves the taxpayer the most amount of money. We cannot continue to make do.”A Commons spokesman said, “Officials are undertaking an initial study into options for the long-term upkeep of the palace. It is anticipated that the results of the initial study will be considered by the House of Commons commission and the House of Lords committee by the end of the year.” – Dailytimes