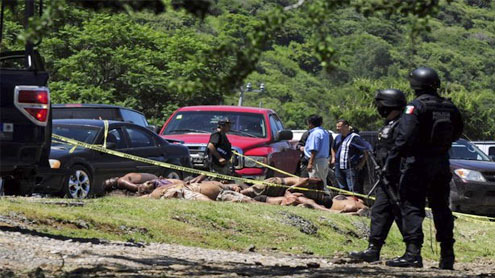 JALISCO, Mexico: The dismembered bodies of 17 men were found Sunday on a farm in a part of central Mexico disputed by violent drug cartels, officials said.

The bodies were dumped near a highway in the town of Tizapan el Alto by the border between Jalisco and Michoacan, said Jalisco state prosecutor Tomas Coronado Olmos. The bodies were discovered as Mexicans celebrated their independence.Coronado Olmos didn’t reveal the identities of the slain men but said the bodies were naked, mutilated and stacked with chains around their necks. They had been killed elsewhere and dumped on the property.

“Our border regions with other states are vulnerable to this kind of action and the dumping of bodies,” the prosecutor said.Authorities haven’t said who they think is behind the killings but the area is a cartel battleground and Mexico’s crime groups regularly leave behind such grisly remains as they battle for control of trafficking routes and markets.

Michoacan state is home to the Familia Michoacana and the Caballeros Templarios organized crime groups, and Jalisco has seen violence by the brutal Zetas and the Jalisco Nueva Generacion cartels.Signs were put up last week in various Jalisco municipalities in which the Caballeros Templarios threatened the Zetas and Jalisco Nueva Generacion.A shootout between local police and an armed convoy last Monday left two people dead and two injured in the same municipality near the border between Jalisco and Michoacan.

In May, authorities found 18 human heads and remains packed into two abandoned cars along the highway connecting Chapala and Guadalajara, Jalisco.On Friday in Tamaulipas, 16 bodies were found across the state just two days after the arrest there of one of the region’s top drug bosses, Gulf Cartel head Eduardo Costilla Sanchez. Nine of the bodies were found in Nuevo Laredo along the Texas border and seven were found in near the town of San Fernando, where 74 dead migrants were found in August, 2010.

More than 47,500 people have been killed in Mexican drug violence since December 2006, when President Felipe Calderon launched a military offensive against the cartels, according to the latest official figures. Some civil groups and activists say the figure is higher. – Yahoonews