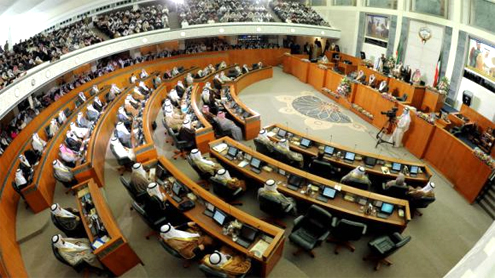 KUWAIT: Security forces blocked hundreds of protesters from staging a rally outside the Parliament building yesterday, as Kuwait’s emir denounced anti-government factions as committing “treason” and vowed to stand firm amid the country’s deepening political crisis.

The hard-line stance underscored the potential for Kuwait’s tensions to escalate into more serious clashes and further polarize the oil-rich Gulf state between backers of the ruling establishment and groups claiming it overstepped its powers.So far unrest has been limited during near-daily protests since Dec. 1 parliamentary elections, which were boycotted by a broad-based opposition — Islamists, tribal clans and liberals — over objections to changes in voting rules.

But protest leaders pledge to strengthen their push for the dissolution of the new parliament and call new elections under the former rules, which allowed voters to cast multiple ballots and appeared to favor the opposition.The election boycott capped months of political showdowns that included street clashes and tear gas — the first serious unrest in a country that had previously avoided any upheaval during the Arab Spring.Any threats to Kuwait’s stability are closely watched by Washington, which has about 13,500 troops stationed there as part of the Pentagon’s counterweight to Iran’s expanding military in the Gulf. Defense Secretary Leon Panetta visited US soldiers in Kuwait last week.

In a speech to inaugurate the new parliament — almost completely pro-government after the opposition boycott — Kuwait’s emir accused the protesters of “treason” and said he would not tolerate ‘attempts from anyone to tear apart social unity.’“This is a new page and I urge you, new parliamentarians, to steer away from disputes and focus on helping push the country forward,” said the emir, Sheik Sabah Al Ahmed Al Sabah. Kuwait has the most politically powerful parliament among the Gulf Arab states, giving lawmakers the ability to openly criticize the ruling family and call government officials for questioning. It’s a tool that was used often by opposition groups, which had control of parliament after elections in February.

The emir, however, later disbanded the parliament in a challenge over voting districts. The decision set up months of political battles that effectively paralyzed Kuwait’s domestic economy.On Saturday, more than 1,000 protesters held an overnight occupation of streets in a Kuwait City commercial district. One of the main protest leaders, Mussallam Al-Barrack, urged supporters not back down until the emir disbands the “parliament of puppets” and sets new elections.

Kuwait’s former voting system allowed up to four votes per person, which was seen as giving an edge to opposition coalitions. They also claim the new rule of one-vote-per-person — imposed by the emir in a decree last month — opens the door for possible vote buying and strong-arm tactics by the ruling system.The opposition insists that only parliament can change voting rules and the emir went beyond his powers.“It is the responsibility of the government now to de-escalate the situation,” said Shafiq Ghabra, a political science professor at Kuwait University. “The government has the power and authority, and if it continues to use power to quell the protests and demonstrations, they are only adding wood to the fire.”

At the same time, the opposition groups appear to be moving in different directions without any clear agenda.Some youth gangs have tried to challenge security forces with roadblocks of burning tires. Others mill about in parks and malls brandishing scarves in orange, the color adopted by the opposition. Elsewhere, anti-government leaders gather in traditional carpeted meeting halls to plot strategy.It appears to show the fraying bonds between the groups now that the election boycott cannot hold them together.

Liberal factions, for example, seek wider freedoms and Western-style openness — which is deeply at odds with the Islamists who have urged for stricter Muslim codes such as death sentences for those convicted of insulting the Prophet Muhammad.Tribal groups, meanwhile, want to preserve their influence and fear the new voting system erodes their clout.“It was an alliance of convenience,” said Eman Al-Bedah, a columnist for the liberal-leaning Aljarida newspaper. “There were many signs that suggested they are not a united group and have no clear plan for what they will do next.”

Kuwait also has been hit by a wave of labor unrest and strikes earlier this year, including walkouts that grounded the state carrier, Kuwait Airways, and temporarily closed customs posts and left several hundred trucks stranded at the border.Calls for better working conditions have grown louder in the wake of the Arab Spring uprisings. Kuwaitis are used to well-paid government jobs and cradle-to-grave benefits that increasingly have become a burden on state finances despite the huge oil wealth. – Arabnews