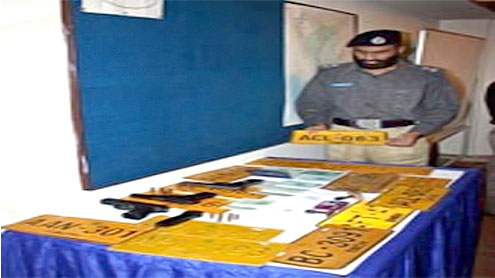 KARACHI: On a bad day for car-jackers, the Anti-Car Lifting Cell (ACLC) of Sindh police has arrested 21 car lifters, recovering18 snatched cars, 17 motorcycles and three pistols from their possession.SSP ACLC Karachi Javaid Akbar Riaz in a press conference at his office on Tuesday claimed that the police arrested accused Sohail Qureshi, son of Hashim Sultan Qureshi and Zohaib son of Yameen and recovered six snatched cars from their possession. The police also recovered an illegal pistol from them.In another raid, the police arrested Akhter Ali Gopang and Nasir and recovered two cars and a van from their possession. The recovered cars include a Hi-ace van and two others with one bearing registration number AAL-583 whose FIR (22/21011) under section of 381/A was already registered in Gulistan-e-Jauhar police station.

Police in another raid overpowered three accused Irfan, Mohammad Ansar and Shan alias Shani recovering two bikes from them. The bikes include one bearing registration number KDE-9153 whose FIR (118/2010) under section 381/A was registered at Eidgah Police Station, and the other bearing registration number KEI-9065 whose FIR was registered in Garden police station.Separately, police recovered Toyota Corolla (AMN-325), Suzuki Mehran (ALP-493), bikes KAR 6197, KBT 9531, KBD 2622, KDT 5373 and a Shahzore truck (KQ-2303) from the rural areas of Sindh and Balochistan. SSP also announced to give certificates to the raid parties. – Dailytimes