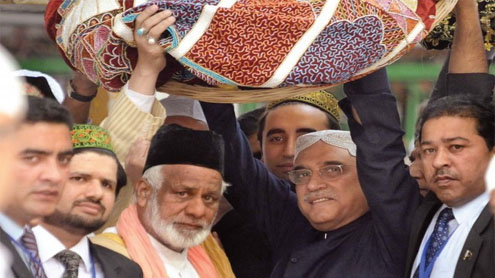 Singh made the demand on Sunday during a 40-minute one-on-one meeting with President Asif Ali Zardari at the former’s Racecourse Road residence in the Indian capital.Billed as a private affair, President Zardari’s sojourn was significant because it was the first by a Pakistani head of state to India since Gen Pervez Musharraf’s trip in 2005.The meeting was followed by a multi-course lunch – with kebabs and curries from all over India, including the disputed region of Kashmir.

Ruling Congress Party chief Sonia Gandhi and Finance Minister Pranab Mukherjee were conspicuous by their absence from the lunch.“Premier Singh told Zardari that it was imperative to bring to justice the perpetrators of the Mumbai attacks,” India’s Foreign Secretary Rajan Mathai told journalists after the meeting.New Delhi has blamed the Lashkar-e-Taiba militant group which it believes has since morphed into Jamaatud Dawa (JuD) charity for masterminding the deadly attacks on the Indian financial capital.

Singh, according to Mathai, also raised the continued freedom of JuD chief Hafiz Muhammad Saeed who now carries a $10 million bounty from the United States for his capture and subsequent prosecution.In response to Singh’s demand, President Zardari said the Hafiz Saeed issue needed to be discussed further. Mathai claimed that the matter would be taken up again between the home secretaries of the two countries at an upcoming meeting.On Friday, Prime Minister Yousaf Raza Gilani threw up the challenge that anyone with concrete proof to prosecute Saeed should present it to the courts.

Appearing with Zardari after the meeting, Premier Singh said that he had accepted an offer to visit Pakistan. “I’d be very happy to visit Pakistan at a mutually convenient date.”However, an Indian foreign ministry source said, the timing of any visit by Singh to Pakistan will depend on issues including a conflict over the Sir Creek River estuary.President Zardari on his part voiced hope that the Indian leader would visit his country soon. “We have spoken on all topics… and we are hoping to meet on Pakistani soil very soon,” he said.

“PM Singh’s acceptance of an offer to visit Pakistan is conditional – meaning Islamabad has to show substantive progress on elimination of terrorism,”former Indian Foreign Service official KC Singh told The Express Tribune.“Only yesterday (Saturday) Zardari said the issue of Hafiz Saeed was not the focus of his visit. So, it is important for India to remind him how important the issue is,” he said.Overall, the two leaders were happy with their interaction – with President Zardari calling it ‘very fruitful’ and Premier Singh saying he was ‘satisfied with the outcome’.

“We have a number of issues and we are willing to find tactical, pragmatic solutions to all those issues and that’s the message that President Zardari and I would wish to convey,” Singh said.Indian Foreign Secretary Mathai said the two leaders discussed Kashmir as well as terrorism and trade.“Both felt that we need to move forward step by step,” he added.

The most important aspect of Zardari’s trip was the bonding between the scions of the Bhutto and Gandhi families – Rahul Gandhi and Bilawal Bhutto. Bilawal has also invited Rahul to visit Pakistan and that invitation might be accepted sooner.Appearing in a television show, Jammu and Kashmir Chief Minister Omar Abdullah said in a lighter vein that President Zardari had lost a Re1 bet.Abdullah recalled that during his 2006 visit to Pakistan he had taken the bet with Zardari that he would not be able to visit Kashmir. “He hasn’t – and now he owes me one rupee.” – Thetribune