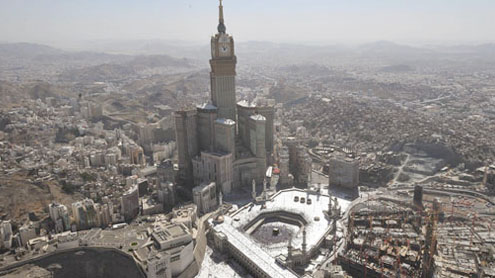 ISLAMABAD: The Federal Cabinet on Wednesday considered and gave its unanimous approval for Hajj Policy and Plan 2012.

After the signing of bilateral annual agreement between the Government of Pakistan and Kingdom of Saudi Arabia on February 22, Hajj Policy 2011 has been reviewed and modified on the basis of an in-depth analysis and consultation with all stakeholders through Hajj workshops at Islamabad, Lahore, Karachi and Quetta.This was stated by Minister for Information & Broadcasting Qamar Zaman Kaira during a joint press conference along with Religious Affairs Minister Syed Khursheed Shah after the cabinet meeting here at Prime Minister’s Secretariat.

He said that Hajj Policy-2012 has been formulated by incorporating necessary features of the agreement and ground realities of Harmain Sharifain relating to accommodation market and facilities to be provided to pilgrims.Kaira said that the cabinet appreciated Syed Khursheed Shah for making very good arrangements for last year’s Hajj.While giving details of the Hajj policy the religious affairs minister said the Hajj quota for 2012 will remain 179,210 and Hajj scheme-2012 shall be implemented through Government Scheme and Private Hajj Group Organizer (HGOs) in the ration of 50:50.

He said that applications for Hajj-2012 under Government Hajj Scheme shall be received on the principle of “First come, First serve”.Shah said that the applications under Government scheme will be invited through designated banks and the intending pilgrims may apply in the group of 10-25 through a group leader.Any person who has performed Hajj during the last five years will not be eligible to perform Hajj in 2012 except Mehram, Group Leader or the one undertaking Hajj-e-Badal.

The minister said that pilgrims under Government scheme will not be required to pay any amount on account of Personal Exchange Quota (PEQ) and same will be arranged by them from open market through banks or foreign exchange companies.Pilgrims, he said, will be airlifted by four air carriers i.e. PIA, Shaheen Air International, Saudi Airline and NAS Air.Airfare for Hajj-2012 as finalised with PIA will be Rs 73000 for south region and Rs 85000 for north region. – Dawn