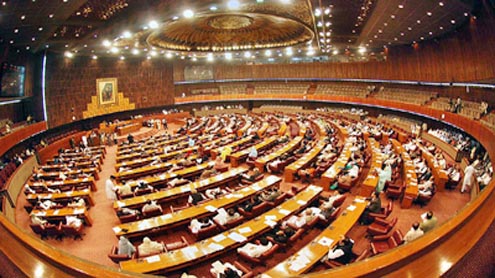 Boycotted by the opposition Pakistan People’s Party, which complained it was not consulted on bringing the election forward from August 6, Nawaz’s candidate is certain to win. Mamnoon Hussain is a businessman, close ally of the premier and a long serving member of the main ruling Pakistan Muslim League-N (PML-N), and comes from Sindh. His loyalty to Nawaz and low-profile will shore up the prime minister’s authority and provide stark contrast to Zardari, considered a sharp political operator behind the scenes.

Supporters say Hussain’s election could be important domestically by giving the south some stake in the federal administration, otherwise dominated by Punjab, Nawaz’s power base. The PPP withdrew its candidate Raza Rabbani after the Supreme Court accepted a PML-N request to change the date as lawmakers would be busy with pilgrimage and prayer at the end of Ramadan. Rabbani, a highly respected senator capable of commanding cross-party support, said the new date would not leave enough time for campaigning in the four provincial capitals and in Islamabad.

PPP leader Makhdoom Amin Fahim announced a formal boycott of the presidential election, saying that the advancing of the polling date amounted to pre-poll rigging. He expressed these views at the third session of the National Assembly that began in Islamabad on Monday afternoon with Speaker Sardar Ayaz Sadiq in the chair. The chair announced the panel of the presiding officers for the current session. Its members include Muhammad Parvez Malik, Dr Tariq Fazal Chaudhry, Syed Naveed Qamar, Shafqat Mahmood, Iqbal Muhammad Ali and Asiya Nasir.

Speaking on a point of order, PPP leader Amin Fahim acknowledged that the PPP and its allies do not have the required strength to win the election but they fielded Raza Rabbani to strengthen the democratic process and fulfil constitutional requirements. He said the date of July 30 is not acceptable and the PPP, ANP, PML-Q and BNP-Awami would not take part in the voting. He was of the view that the Supreme Court unilaterally gave a verdict on an application submitted by PML-N leader Raja Zafarul Haq and did not hear presidential contenders or stakeholders. Meanwhile, PTI leader Makhdoom Shah Mahmood Qureshi said that his party subscribed to the viewpoint of the PPP but does not agree with its strategy. He said the PML-N and its allies have numerical superiority and the opposition was not in a position to get its candidate elected even if there was a unanimous candidate.

He said despite this the PTI proposed to the PPP to nominate a non-controversial consensus candidate, but the PPP unilaterally nominated Raza Rabbani. He said the PTI had decided to contest the election to strengthen democratic traditions. PML-N leader Khawaja Muhammad Asif said the decision of the PPP to boycott the election is an afterthought to run from the contest sensing ground realities.

Pakistani presidents are elected by the members of four provincial assemblies, and both houses of parliament. Constitutional amendments passed by the last PPP government mean that the Presidency is again a ceremonial post, a status likely to be cemented by the fact that Hussain has little personal clout. After formally stepping down in September, many expect Asif Ali Zardari to spend significant time abroad out of concerns for his security and to escape the possibility of legal action for alleged corruption. – DailyTimes

Speculation rife over Andhra CM threat to quit over bifurcation