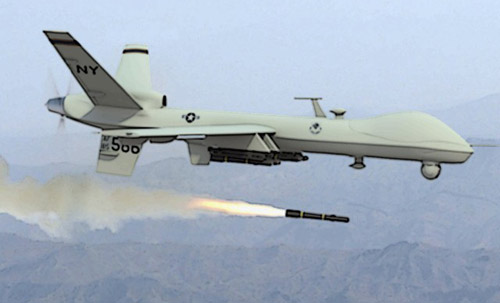 At least 10 people were killed, increasing the death toll to 16 in a second drone strike in North Waziristan during last 24 hours. According to the sources, the drone targeted a house and fired 8 missiles near Miranshah, headquarters of the restive agency, which killed 10 people at the time.

It is pertinent to mention here that in the previous drone strike by the predator in Tibbi, Ghulam Khan Goth in Miranshah six suspected militants were killed. Moreover, a US drone fired two missiles at the house killing four Uzbek militants and two Punjabi-Taliban militants, sources claimed. -aaj.tv