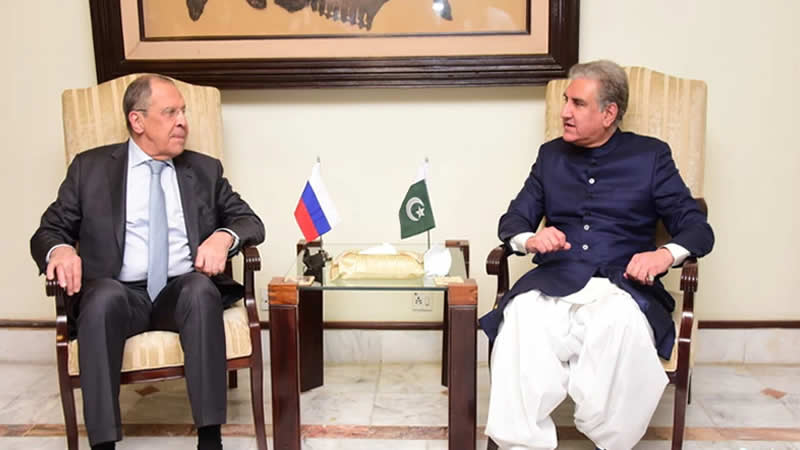 When Russian Foreign Minister Sergey Lavrov meets Pakistan’s civil and military authorities here on Wednesday (today), the agenda would encompass bilateral relations with an emphasis on cooperation in the trade, economic and counterterrorism fields as well as exchange of views on international and regional issues including the Afghan endgame.

But on top of that, as per diplomatic sources and officials, the visit highlights the deepening ties between Moscow and Islamabad, which remained in the opposite camps during the Cold War, particularly during the “Afghan jihad.”

The high-level exchanges were the result of years of efforts by the two sides to bury the past and open a new chapter in their relationship. This shift has been necessitated by the new alignments as well as strategic realities.

Lavrov is visiting Islamabad for the first time since 2012, suggesting an upward trajectory in the relationship. The fact that he opted to visit Islamabad, flying in directly from New Delhi, suggests that Russia is no longer viewed India as its only ally in the region.

In New Delhi, Lavrov met his Indian counterpart S Jaishankar and told a news conference that both countries were discussing “production of additional military equipment” in India. He did not specify the equipment that Russia planned to produce in India.

Russia has remained the major arms supplier to India before the US and Israel took over Moscow in that field. The US has been pushing India to distance itself from any arm deals with Russia. Washington has warned India of possible sanctions if it goes ahead with Russian S-400 surface-to-air missile system.

Sensing a close proximity between the US and India, Russia is also diversifying its options and its policy on Pakistan is no longer dictated by New Delhi’s concerns. In 2016, despite strong Indian objections, Russia sent troop to Pakistan for the first time in history to conduct the joint anti-terrorism drills.

The importance of Russia, Pakistan relationship can be judged from the fact that Foreign Minister Shah Mahmood Qureshi went to the Nur Khan Airbase in Rawalpindi to receive his Russian counterpart.

The two had a brief chat at the airport while the formal talks will be held on Wednesday (today). The Russian foreign minister will also call on Prime Minister Imran Khan and Army Chief General Qamar Javed Bajwa.

The visit is seen as significant against the backdrop of ongoing regional developments, particularly the Afghanistan situation. Ahead of the Lavrov’s visit, the Russian foreign ministry had termed Pakistan as an “important partner” of Moscow in the foreign policy.

“The cooperation between Moscow and Islamabad is based on the coincidence or similarity of positions on most of the problems of the world community, including issues of strategic stability and countering terrorism,” the Russian official handout read.

It noted that opportunities for joint work significantly expanded after Pakistan’s accession to the Shanghai Cooperation Organization (SCO) as a full member in June 2017. The two counties habe also maintained high level contacts in recent years.

Meetings between the foreign ministers of the two countries, Lavrov and Qureshi, are held regularly. The previous meeting was held in September 2020 in Moscow within the framework of the SCO Council of Foreign Ministers meeting.

Russia said the priority task was to expand trade and economic ties. In 2020, the volume of trade amounted to a record $790 million, an increase by 46% was inter alia due to large supplies of Russian wheat.

Within the framework of the Intergovernmental Commission on Trade, Economic, Scientific and Technical Cooperation, specific projects of business partnership are discussed.

Russia is also investing in many energy projects. The flagship project is the construction of the North-South gas pipeline from Karachi to Lahore under the Intergovernmental Agreement signed in 2015. Negotiations are under way to an early start of its practical implementation.

Other promising projects include the modernisation of the Karachi Steel Mills built with the assistance of the erstwhile Soviet Union (USSR), the reconstruction of the energy and railway systems of Pakistan, as well as the supply of Russian civil aircraft.

Lavrov, who is also accompanied by his country’s special envoy on Afghanistan Zamir Kabulov, will also discuss Afghanistan peace efforts. Moscow has emerged as one of the key players in the Afghan endgame as it is seeking a political solution to the war in the neighbouring country.

“We look forward to an early finding of a constructive solution in order to end the civil war in the Islamic Republic of Afghanistan through agreements on the formation of an inclusive government with the participation of the Taliban movement,” Lavrov said, ahead of traveling to Pakistan.

“We will continue to provide the necessary assistance in advancing this process, including through the Troika-Plus mechanism of Russia, the United States and China with the participation of Pakistan, the Moscow Format of consultations on Afghan issues, as well as the SCO-Afghanistan Contact Group,” he added.

It is expected that the Russian foreign minister would discuss the role of India in the Afghan endgame. Pakistan is opposed to Indian role in the peace-making efforts since it views New Delhi as a spoiler. India, although is part of the Moscow process, was not invited by Russia at a recent conference on Afghanistan attended by representatives of Pakistan, US, Russia and China.