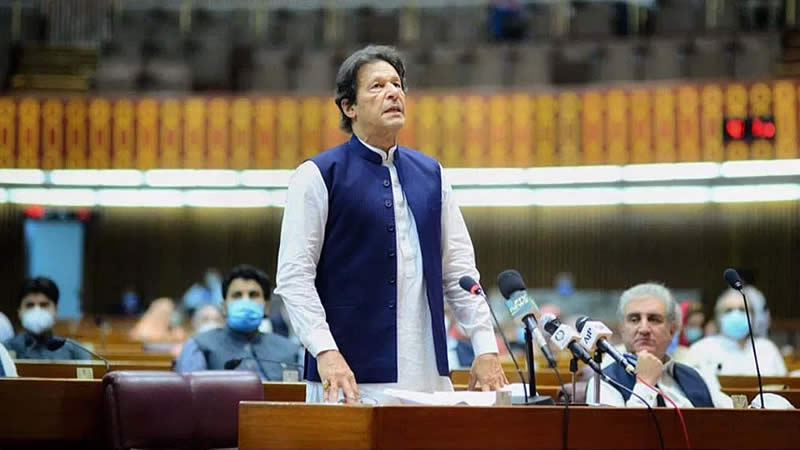 Prime Minister Imran Khan will seek a vote of confidence from the parliament after the ruling PTI lost the hotly contested Senate general seat from Islamabad to the joint opposition, Foreign Minister Shah Mehmood Qureshi announced on Wednesday.

Addressing a press conference hours after the PTI’s upset loss was confirmed, Qureshi said it should be made clear who stood where after today’s vote.

“Those standing with Imran Khan will be seen on one side and those who are not, and think they like the ideology of the PPP and PML-N have every right to join their ranks,” said Qureshi, who was flanked by several PTI ministers including Asad Umar, Shireen Mazari, Shafqat Mehmood and Fawad Chaudhry.

He urged PTI workers to hold onto the belief that the PTI would compete with the opposition alliance Pakistan Democratic Movement (PDM). “They have united but have no ideological basis for their union. They do politics of self-interest …. and want to continue with such politics but we will bury it,” he said.

Earlier, Qureshi started the press conference by saying that today’s events had vindicated Prime Minister Imran’s stance, adding that this was not something new, but had been happening for the past several years.

He went on to count his party’s attempts to ensure transparency in the electoral process, saying the PTI had invited the opposition to move towards open ballots, but “you saw the difference between what they practised and [what they] preached.”

“We informed the ECP that it is your constitutional duty to ensure free and fair elections,” said Qureshi, adding that the ECP had failed to ensure transparency.

“I say this because as per our fears, a video and audio surfaced a night before the elections and Fawad Chaudhry tried to knock the doors of the ECP, but there was silence there.” The minister added that it was surprising that elections were to be held the next day but no one from the ECP was available.

At this point, they had an even greater responsibility to ensure transparency in the polls. “But we did not find them up to the standard.”

Qureshi said that the struggle started by Prime Minister Imran is one of “good versus evil”, adding that the premier had made uncountable efforts to change the political culture.

“In this fight, the nation is watching who stands where,” he said. “I want to assure the voters who cast their vote for the bat [PTI election symbol] that the fight will go on.

“In my opinion, today is a sad day for democracy. Those who claimed to be the torchbearers of democracy have killed the principles of democracy.”

The joint opposition candidate, PPP’s Yousuf Raza Gilani, was contesting against PTI’s Abdul Hafeez Shaikh for the lone general seat from the capital. He won the election by bagging 169 votes, while Shaikh received 164 votes. Seven votes cast for the seat were rejected, while there were reports that at least two PTI MNAs’ votes were rendered invalid because they didn’t mark their ballots correctly.

While the ruling PTI’s numerical strength in the Senate was expected to almost double from the existing 14 seats, the hottest contest was expected between Gilani and Shaikh.

Hours before polling commenced, the contest became even more controversial with the emergence of a video of Gilani’s son, Ali Haider, explaining to certain lawmakers how to cancel their votes.

The government immediately cried foul, demanding that the Election Commission of Pakistan (ECP) declare Gilani ineligible after the emergence of the video that it said showed “votes being bought”. It also filed a reference with the ECP seeking Gilani’s disqualification for being involved in “corrupt practices”.

Speaking to media in Islamabad, Ali Haider accepted that he was in the leaked video, but denied he was engaging in a deal to buy votes for his father. He added that the MNAs in the video belonged to the PTI and were his “friends”.

However, some audio recordings were reportedly leaked after his press conference in which a number of people could be allegedly heard discussing monetary deals worth millions of rupees with lawmakers in order to buy their votes.

Two of the voices in the leaked audios were said to be of Ali Haider and Sindh Information Minister Nasir Hussain Shah, local media reported. Speaking on Geo News programme ‘Aaj Shahzeb Khanzada Ke Saath’, Shah denied that the voice in the audio clips was his.

Addressing a press conference before the government presser, PPP chairperson Bilawal Bhutto-Zardari had hailed Gilani’s win as a victory for all democratic forces in Pakistan.

“[Prime Minister] Imran Khan should resign, this is not only the opposition’s demand but of the government’s own members,” Bilawal had claimed.