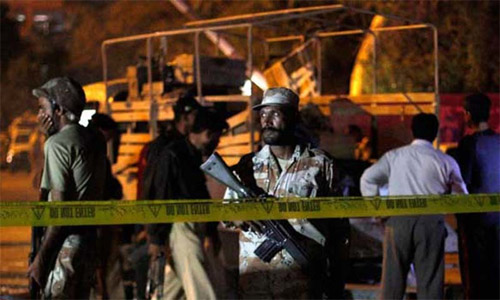 A large number of workers and relatives of the arrested men took to the streets after the incident, shouting anti-government slogans.

Member of Sindh’s Provincial Assembly Faisal Sabzwari, belonging to the MQM, addressed a press conference and said that he was on his way to a convention of the party’s social services wing which was being held at his office over the collection of hides during Eidul Azha when he heard gunshots. The provincial minister said he introduced himself to a Rangers’ official but was told that he could not proceed to the party office as a raid was being carried out. He alleged that some women workers were mistreated and added that he had information of the arrests of at least 30 party activists during the raid.

An official version of the incident was not available till the filing of this report. The MQM’s Central Rabita (coordination) Committee, later issued a statement according to which around 500 party activists including women and office bearers were present at the party office situated on Abul Hasan Isphahani Road when it was raided by Rangers personnel. The statement condemned the “ransacking of the office and arrest of workers” and demanded an end to what it called “unjustified arrests of its activists and office bearers.” Sindh Minister for Youth Affairs Faisal Sabzwari, Member of National Assembly Mohammad Muzzamil Qureshi and other members of MQM’s Rabita Committee, who had reached the spot, were allegedly barred from entering the office during the raid.

The party also appealed to President Mamnoon Hussain, Prime Minister Nawaz Sharif, Sindh Governor Dr Ishratul Ibad Khan and Sindh Chief Minister Syed Qaim Ali Shah to take notice of the raid at the MQM office and the arrest of its activists. The party also demanded them to seek an answer from the Rangers in this regard. Speaking to DawnNews, MQM leader Waseem Akhtar said that the party had reservations against the method adopted by the Rangers personnel while conducting the raid. Some party workers also alleged that the Rangers personnel had misbehaved with MPA Faisal Sabwari and women workers of the MQM. Fear and panic gripped the area after the incident and shopkeepers and market shut their businesses. -dawn

The Publicity of Private Lives