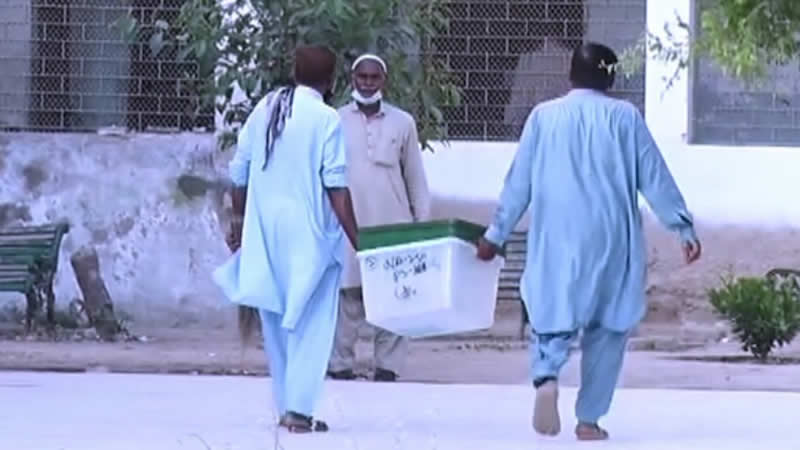 The Pakis­tan Peoples Party (PPP) and Pakistan Muslim League-Nawaz (PML-N) on Sunday continued their war of words over the outcome of recently-held by-election on a National Assembly seat (NA-249) in Karachi as the latter submitted an application to the chief election commissioner (CEC) asking him to place election material, including ballot papers, under the supervision of the Army or Rangers.

The application was submitted by Miftah Ismail, the PML-N candidate in the constituency, after the PPP “welcomed” the decision of the Election Commission of Pakistan (ECP) to stay announcement of official results for a recount, and asked the PML-N not to accuse the party of winning the seat with the support of the “establishment”.

The leaders of the two parties, in their statements, however, continued to attack each other with the allegations of having a covert support of the “establishment”.

PPP candidate Qadir Mandokhail had won the NA-249 by-election in Karachi by a small margin after securing 16,156 votes, while Dr Ismail had secured second position with 15,473 votes, according to provisional results released on Friday. The Pakistan Tehreek-i-Insaf and PML-N had cried foul and subsequently rejected the results.

In his application to the CEC with the subject “safe custody of ballot papers and other materials”, Mr Ismail of the PML-N stated “most of the polling staff/presiding officers were from the provincial government of Sindh and they favoured the ruling party in illegal manner as complained by almost every contesting candidate/parties”.

“We would like to record our serious apprehension as to the safe custody/security of the ballot papers and other materials … lying in the custody of Sindh Police, which again is a provincial government department and there is strong likelihood that the ballot papers, counterfoils of the issued ballot papers, marked copies of the electoral rolls, ballot paper accounts etc may be tempered to frustrate the whole electoral process,” says Mr Ismail in the application, which was released to the media by the PML-N.

“We, therefore, request you that the custody of all election materials, including ballot papers, in sealed form, may kindly be taken over by the Commission (ECP) and placed at some safe place under the supervision of either Pakistan Rangers or Pak Army till the final disposal of the matter,” requested the PML-N leader.

He “appreciated” the immediate intervention of the ECP for issuing the “stay order” against the consolidation of results and giving him an opportunity of hearing against his application for vote recounting.

Earlier, speaking at a news conference at the party’s media office in Islamabad, PPP leaders Farhatullah Babar and Nayyar Bokhari “welcomed” the ECP’s decision to have a recount in NA-249 constituency on the PML-N’s request.

Mr Babar said making such a request was the PML-N’s right and the PPP welcomed it as they wanted to see the ECP as a strong institution. Under the rules, he said, a recount could be conducted in a constituency where the winning margin was less than five per cent of total votes polled.

Mr Babar said NA-249 was not a new constituency for the PPP as the party candidate had won from the constituency in the 1988 elections.

“The PPP does not have a large majority of votes in this constituency but we have considerable support. The PPP has shown groundwork and activism and has now won,” he said.

The PPP leader said only the ECP could explain the reason for the delay in the vote counting process but there were 30 candidates and eight election observers who had to be given the Form 45 during Ramazan. For this exercise, he said, the ECP had to fill 10 to 12 forms.

Mr Babar said if the PPP had lost this election, it would never have had raised this issue. He expressed the hope that in the recount, the votes of the PPP might increase.

“If you will talk about a deal with the establishment, then there will be talks on the departure of the leaders abroad and the grant of bails,” he said in an apparent reference to Nawaz Sharif’s departure to London in 2019 despite conviction and the recent grant of bail to Shehbaz Sharif and his son Hamza Shehbaz.

Replying to a question about the differences within the Pakistan Democratic Movement (PDM) and the request of Maulana Fazlur Rehman to the PPP to rejoin the alliance, Mr Babar said it was the PPP which had founded the opposition alliance.

“Who are these people who are talking about us approaching them to rejoin the PDM? Instead, they should come to us, take back the show cause notices and apologise to us,” Mr Babar said.

Nayyar Bukhari alleged that it was the PML-N which had harmed the PDM. The PPP, he said, was still ready for a long march and a no-confidence motion against the government.

About the Karachi by-election, he said PPP candidate Qadir Mandokhail was a political activist and had been present in the constituency for the past many years. He said like the ruling Pakistan Tehreek-i-Insaf (PTI) which had lost the Senate elections by nominating a technocrat, Dr Abdul Hafeez Sheikh, the PML-N had introduced another technocrat, Miftah Ismail, in the by-election.

Mr Bukhari expressed the hope that the ECP would take decisions according to the law.

The PML-N Senator taunted the PPP by saying a party having just seven members from Punjab in the legislatures was talking about long march and no-confidence motions. He said the PPP wanted to bring a no-confidence motion in Punjab like it “stole” the elections in NA-249 and the office of the opposition leader in the Senate.

Another PML-N leader, Talal Chaudhry, in a statement said the PPP had lost its claim to be called an opposition party after getting the Senate opposition leader office with the support of the government.