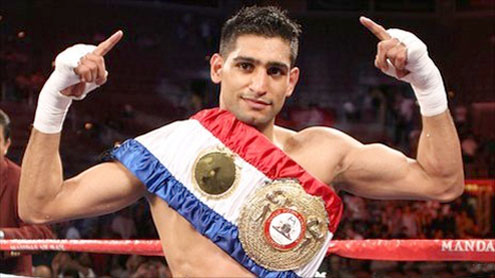 Amir Khan says he will probably fight only once more at light-welterweight before stepping up a division.The 24-year-old is now considering adding the WBC title to the WBA and IBF belts he currently holds.Khan told BBC Radio Manchester: “I wanted to fight [Timothy] Bradley for the undisputed title but he turned it down so the WBC stripped him.”[Erik] Morales is fighting for that title in September so if he wins Morales could be an option,” he added.The Bolton boxer does have another option though, to fight the IBF’s number-one contender Lamont Petersen.Khan said: “The IBF title I’ve just won, the mandatory for that is Lamont Petersen so maybe that could be a possibility.”Whoever his next opponent is, Khan is planning only one more fight at 140lbs before moving up to welterweight and closer towards a fight with Floyd Mayweather.”There may be one or two names left in this division. We’ll get this fight out the way and maybe it might have to be that we move up to 147 because there’s no one else,” he added.

After he beat Zab Judah in their light-welterweight unification fight in Las Vegas Khan expressed a desire to fight American legend Mayweather.”My aim is to move up the pound-for-pound rankings and to one day be pound-for-pound champion,” he said.”The Mayweather fight is something I’m looking at for the future and it would be huge for me. It would drive me on.” – BBC

When the Yankees go home

When the Yankees go home