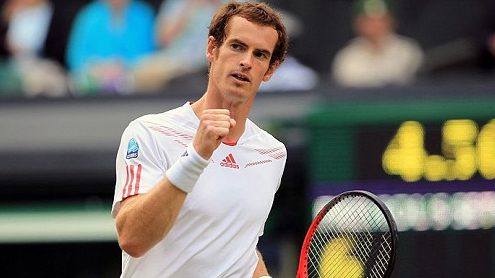 It was a bizarre end to an unforgettable encounter. Perhaps it was always going to take something this strange to end Britain’s 74-year semi-final jinx.

Murray’s bottom lip wobbled as it finally hit home that he will return to Centre Court to contest the Wimbledon final against Roger Federer. It is the stage that players covet above all others. Four British men – including Murray – had reached this point, only to fail to take that last step. Now, at the 12th attempt, we can finally wipe 1938 runner-up Bunny Austin from the record books.  That spiteful minority of British society who spend their time blackening Murray’s name might as well take a short holiday in the Pacific Islands, where tennis is unknown. For the next 36 hours, Murraymania is upon us. And if he should end another historical jinx tomorrow, this laconic, gangling Scot will be catapulted into the list of great British champions.

But wait. The player awaiting Murray is even tougher than Jo-Wilfried Tsonga, who he eliminated yesterday by a 6-3, 6-4, 3-6, 7-5 scoreline. This is Murray’s fourth grand slam final and he has been unfortunate in his opponents. Last year in Australia he faced Novak Djokovic at the start of arguably the finest individual season in modern tennis. And on the other three occasions, he has faced Federer, whose resurgence this year is close to confirming him as tennis’s GOAT – or greatest of all time. Murray will have a shot if he plays like he did in the opening two sets against Tsonga, when he was so dominant that the crowd was almost inert. It was as if they were struggling to credit with what they were seeing. British players have beaten big-name opponents on this court, but they have rarely done it with so little fuss, with such cold-blooded fury. Tsonga is normally the man with the greater power and aggression but he was helpless in the face of Murray’s charged-up game.  Still, never fear, there was a twist to come at the start of the third set.

Tsonga craftily left the court with the trainer, giving Murray time to think about the prize that now lay within his reach. And when the match resumed, Murray showed human weakness for what felt like the first time, opening the set with a double-fault and then missing a regulation forehand. That was enough of an opening for Tsonga who stormed through with his first break of serve.  The margins are small at this level. We saw that in the breathtaking quality of the first match between Federer and Djokovic, and we saw it now: one momentary lapse can be enough to cost you a set. Then, in the fourth and final set, the match turned manic, with so much incident that you could almost make a full-length feature film from those 55 breathless minutes.  Tsonga had been subdued in the early stages, as Murray’s serves kept flying past him at speed. But he was doing everything now. He sprinted across court so fast that he had to hurdle his own chair, achieving such air on his leap that Michael Jordan would have applauded.

Next came an absurd diving volley that left Murray almost butting the ground in frustration, like some racket-wielding Basil Fawlty. Even when Tsonga lost his footing and banged his broken little finger into the court, he bounced up again with a cheery wince, and kept on swinging. Murray was losing impetus. On each successive point he seemed to be more cautious, less like the bold adventurer who had swashbuckled his way through the final stages of his previous two matches.  The muzzle velocity of his racket was fading from shotgun to water pistol. But his nerve was not broken. On one point, he invoked the spirit of his coach and mentor Ivan Lendl by ramming one of Tsonga’s many drop volleys straight back.

John McEnroe said last month that “Every time I hit a drop volley, I knew that nine times out of 10 Ivan was going to go straight at me,” but Murray has usually fought shy of such confrontational tactics.Not this time: his full-strength forehand landed an eye-watering strike on Tsonga’s groin, forcing the Frenchman to drop to his knees two or three times before striking his next serve.  Such was Tsonga’s inspiration that he still held out to move to 4-4. But four games later he suffered a blow that must have hurt every bit as much. Murray strung a sequence of full-tilt service returns together, climaxing in the forehand cross-court winner that clipped the line and drew the final, fateful overrule from Hawk-Eye. Britain had a Wimbledon finalist at last.-Telegraph