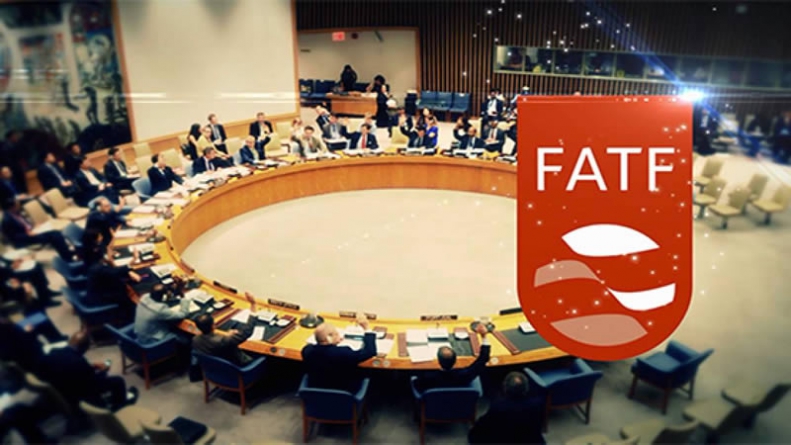 “Pakistan rejects the recent comments made by the Indian Defence Minister claiming that “FATF can any time blacklist Pakistan…”. The statement reinforces Pakistan’s concerns, repeatedly highlighted to the FATF membership, about India’s attempts to politicise the FATF proceedings to further its narrow, partisan objectives,” read the FO statement.

“India’s incessant smear against Pakistan and blatant partisanship also call into question its credentials to be co-chair of the Asia-Pacific Joint Group that reviews Pakistan’s progress to implement the FATF Action Plan,” the FO said, adding that these concerns have been previously brought to the attention of FATF members.

It urged the group’s members to take notice of India’s malicious campaign against Pakistan and reject any attempt aimed at politicising the FATF proceedings.
Pakistan’s FATF compliance poor: APG report

“It is important for FATF to ensure that the process remains fair and unbiased,” said the FO.

Pakistan had raised the same demand in March this year when it asked the FATF to remove India as co-chair of the Asia-Pacific Joint Group to ensure that the FATF review process remained objective.

Asad Umar, who has since been removed as finance minister, had asked FATF President Marshall Billingslea to appoint any other member as co-chair of the group in place of India.

The Joint Group is a sub-body of the International Cooperation Review Group (ICRG) of the Asia Pacific Group. Pakistan is a member of the APG and its case is being presented before the FATF by the APG. India’s Financial Intelligence Unit’s (FIU) director general is the co-chair of the Joint Group.

“India’s animosity towards Pakistan is well known and the recent violation of Pakistan’s airspace and dropping of bombs inside Pakistani territory is another manifestation of India’s hostile attitude,” Umar wrote in a letter to the FATF president.

In his letter, the then-finance minister referred to a statement regarding efforts for global isolation of Pakistan and India’s call for the blacklisting of Pakistan during the ICRG meeting on February 18, 2019, which demonstrated Indian intentions to hurt Pakistan’s economic interests.

The Indian defence minister’s provocative statement and Pakistan’s rebuttal come just days before the FATF plenary meetings scheduled to be held in Paris from October 13 to 18.

According to the recently released final Mutual Evaluation Report of the Asia Pacific Group (APG), Pakistan faces high risks of money laundering and terror financing and it needs to improve the understanding of these risks that are also animating from various terrorist groups operating in the country.

The report was released 10 days before the FATF plenary meeting, which is going to give its decision on Pakistan’s status on its grey list.

After the APG report, chances are high that Pakistan would be retained on the grey list. – tribune

This author has not added a biography. Meanwhile Top has contributed 2225 posts. Click here to view them.