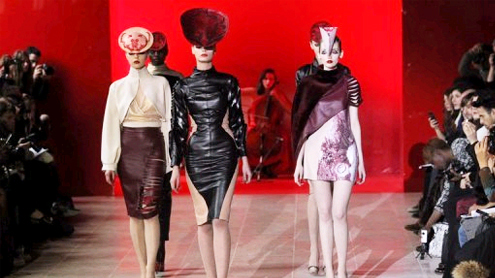 PARIS ·— Paris Fashion Week kicked off Tuesday with the in-crowd abuzz at the prospect of style icon Hedi Slimane designing for Yves Saint Laurent, and rumours putting a newly-free Raf Simons in the wings at Dior.

Opening with a day devoted to young designers, the Paris autumn-winter collections round off a month of women’s wear shows that have sent fashionistas, models and media trooping on a style trail from New York to London and Milan. Adding spice to the proceedings, a fashion world merry-go-round kicked off in Milan last week as Germany’s Jil Sander announced its Belgian designer Simons was leaving to make way for a return of the house’s founder.The discreet, avant-gardist Simons had been widely tipped a few months back as a successor to John Galliano, sacked from Dior a year ago over a drunken, racist outburst in a Paris bar.

Showing his swansong collection for Jil Sander Saturday, Simons earned a standing ovation for the pure, sensual lines of a look built around coats and dresses, all in soft pale blues, pink blushes, and creams.His sudden availability has set Twitter abuzz with speculation, although a spokeswoman for Dior insisted no announcement was planned for Fashion Week.Change is afoot at the Parisian luxury house Yves Saint-Laurent, however, after it confirmed that its Italian designer Stefano Pilati would show his last collection next Monday, without naming a successor.Industry sources told AFP at the weekend that he would be replaced by Slimane, a designer admired by rock stars and fashion trade peers alike and who is returning after several years away from fashion.

Slimane, whose father is Tunisian and mother Italian, worked at YSL in the late 1990s but made his mark at Dior from 2000 to 2007, revolutionising menswear with his androgynous skinny suits and tight low-cut trousers.On the Paris catwalks, meanwhile, Portugal’s Fatima Lopes opens the nine days of ready-to-wear shows, followed by the elaborate knitwear of France’s Alice Lemoine and young Belgian Cedric Charlier, showing his first own-name line after leaving Cacharel.Wednesday brings the first big names with Belgium’s Dries Van Noten, Rochas and Mugler, followed Thursday by Carven, Balmain and India’s Manish Arora.

Dior and Lanvin grab the spotlight on Friday, Haider Ackermann and Jean Paul Gaultier follow on Saturday, and Hermes, Kenzo and Givenchy wrap up the weekend on Sunday.Fashion Week continues Monday with Pilati’s last show for Saint Laurent, Britain’s Stella McCartney, and the young Maxime Simoens’ first line for Leonard.On Tuesday Chanel takes over the ornate, domed Grand Palais hall — as has become its Fashion Week custom — before shows by Jean-Charles de Castelbajac, Valentino and Alexander McQueen.Marc Jacobs’ latest look for Louis Vuitton headlines the final day of the shows, which wrap up with Lebanese designers Elie Saab and Rabih Kayrouz. – Khaleejtimes