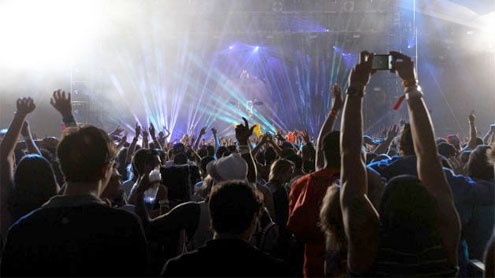 After two consecutive weekends, the Coachella music festival came to a close April 22, and for fashionistas who couldn’t make the California event Instagram provided the perfect source for discovering the latest festival trends. Check out the sartorial choices of stars including Dita Von Teese and Rihanna here.

Before setting off for Coachella burlesque star Dita Von Teese took to Twitter to joke that the first weekend had been a “dress rehearsal” for fashionistas, adding that she was “going deep” into her closet to come up with suitable looks. Her preparation paid off as the cherry print jumpsuit and retro shades she sported placed her among some of this weekend’s best dressed.

Photographed partying with Von Teese was television star Kelly Osbourne, who took to her Instagram to share a snap of her new lavender hairdo. Musicians Katy Perry and Azealia Banks also favored purple locks for this year’s Coachella.

Socialite Paris Hilton was another celebrity to embrace colored locks at this year’s Coachella, opting for bright pink streaks to match her neon fingerless gloves and pink bag.
http://instagr.am/p/Js0SoTMHJV/

Another Brit showing of her style credentials at Coachella was Emma Watson, who attended the Mulberry party in an animal print playsuit, cardigan and floppy hat.
http://statigr.am/p/171187379309887072_40289846