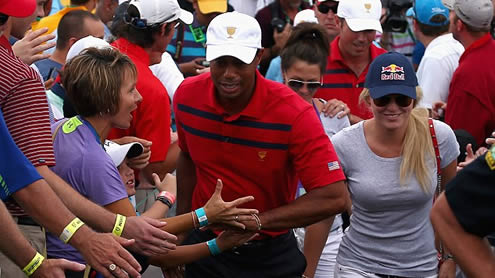 This week Lindsey Vonn has been walking the fairways of Muirfield Village in Dublin, Ohio along with boyfriend Tiger Woods whilst he competes in the President’s Cup. The two appeared to be getting along famously with Lindsey trying to bring out a a softer side of the ever-so-serious championship golfer. However, Lindsey has said that her relationship with Tiger has taught her how to cope with pressure. She told the Detroit Free Press: ‘He understands pressure and he understands, obviously, competing at an extremely high level. It’s difficult for me going into big events like the Olympics because there’s so much more pressure and media attention, and he gets that every single day. So it’s nice to be able to talk to him about it and we can relate to each other’s lives so well. So I think that’s one of the reasons why we work.’ Vonn has been with Tiger at the Masters, U.S. Open, British Open, PGA Championship, Players Championship and Tour Championship this year. Her supporters are now asking if Tiger will repay her the compliment when she heads to the Winter Olympics in Russia next February. Earlier in the week it wasn’t just Lindsey Vonn’s red wellingtons making a splash at the President’s Cup – a sneaky squirrel has stole the show at Muirfield Village. Sammy the squirrel has become the U.S. team’s mascot the furry critter has been doing the rounds, with Olympic skier Lindsey Vonn sneakily placing it on boyfriend Tiger Woods’ shoulder in a funny prank. Video footage captured the moment Vonn pulled the squirrel out of Love III’s trouser pocket before surreptitiously placing it on 37-year-old Woods’ neck. Woods, who was focused on the golfers still on the green, initially brushed his shoulder until he realized what was sitting on him. The world number one appeared rattled at first, before smiling broadly, to the delight of his 28-year-old girlfriend. Before heading to Minnesota today, Vonn tweeted to Love: ‘Keep the squirrel happy until I get back tomorrow. :)’

Vonn made quite an impression at the golf tournament yesterday. Pairing her red boots with snug white denim jeans and a navy blue V-neck T-shirt, the snow siren was the center of attention on the green, but she pretended to not notice. For hours she watched as her boyfriend of one year participated in the Four-Ball matches, which began 90 minutes late due to rain.

The gold medal winner said when she met Woods, who is divorced from Swedish beauty Elin Nordegren, they hit it off. ‘We immediately clicked, you know? It was just one of those things,’ she told Vogue in August. ‘Tiger’s fame is obviously in the extreme, the amount of scrutiny that he’s constantly under. ‘But that’s the thing: It all comes back to being happy. It doesn’t really matter what anyone else thinks; do what you love to do and be happy and that’s it.’ – Dailymail